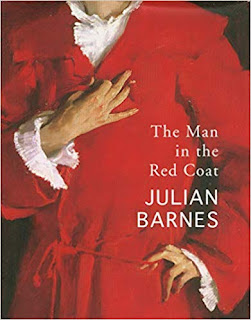 I was writing this book during the last year or so before Britain's deluded, masochistic departure from the European Union.

Not a few critics of The Man in the Red Coat have made good use of Barnes's afterword, in which he makes tentative links between the Parisian fin de siècle world that is the book's topic and the troubled politics and discourses of today. Altogether, The Man in the Red Coat is something of a disappointment. Its art and literary criticism are second to none, and it is richly illustrated, but it is confusing book, with meanderings that mimic W. G. Sebald but without his unpredictability. I found it smelt a little too much of the lamp. I fear the red-coated Pozzi, whose Sargent portrait Dr Pozzi at Home, inspired Barnes's book, may simply not be very fascinating as a subject.

Ah, but when was Julian Barnes writing? That's what perversely interests me. Was it in 2015, the year before Britain's EU Referendum? That's when Barnes first saw the picture, in an exhibition at the National Portrait Gallery. But the UK didn't 'depart' from the EU in 2016. The UK remains a full member to this day.

Perhaps Barnes means he wrote the book in 2018, the year before the first expiry of the Article 50 period? The book was published shortly after the next major departure deadline of the end of last month: so maybe Barnes believed the Prime Minister's 'do-or-die' pledge to extract the country from the European bloc by that date. I guess the 'Author's Note' was probably penned for posterity, for a future time when Barnes fatalistically supposes Brexit will be a fait accompli.

I note the absence of Anita Brookner's name from the book's Acknowledgements page. If ever something was written for her, or would have benefited from her input, this is it. She died in March 2016, and Barnes lamented the first year of her 'deathtime' in an article in the London Review of Books a year later (LRB, 27 April 2017), a piece in which he also inveighed against Brexit and the turbulence of the times. The Man in the Red Coat is, I reckon, a book to return to, but when the dust has settled.

Posted by The Brooknerian at 07:17