All Too Short a Date

So the English summer ends in a blaze of unwonted heat, and I reflect on my reading.

In Switzerland I read Henry James, as followers will have noted. I'm still a little puzzled as to why I didn't get on with Confidence. I'm presently reading The American, which is earlier still, and it is a pure pleasure. Every page, every line, has something to savour. I can't quite decide whether I've read it before. It's the classic 'International Theme' novel in which American manners clash with the ways and mores of old Europe. I would like to have read Confidence in a revised form, but it doesn't exist: James didn't include the novel in his New York Edition. The version of The American one chooses to read is, I think, crucial - it affects one's reading experience and even says a little about one's character. Absolutely I favour the later version. The differences between an early James and its revised form are in evidence practically everywhere. It's a layered complexity the current Oxford edition of the novel fruitfully discusses and exemplifies.

(And would one like to have later, revised versions of early Brookners? Of course. I'd love to read a revised Start in Life. But Brookner never revised. Perhaps she might rewrite a last chapter, if she had rushed it. But otherwise, she said, it was all first draft. There just wasn't time! She had left it late, and it was as if she were writing for her life.)

Later, in Germany, I read The Bertrams, a lesser Trollope and one I've never previously been tempted by. Is it any good? Trollope in his autobiography is scathing, but the book has much to offer. There's a chapter in the middle of the novel called 'Miss Todd's Card-Party' and it's a gem and a beauty, not least because it's one of those Trollopian moments when a breath is taken and the endlessly genial, endlessly tolerant narrator takes in the minor lives of some of his less central personages, in this case a group of shambolic oldsters whose heyday was in the Regency. I adored it, but perhaps this was because I was on vacation, and in Kassel, such a charming backwater.

And all the while I've been improving my Shakespeare. I've never really got to grips with the histories. But the two parts of Henry IV, how lovely they are - such poetry, such prose, such counterpoint! 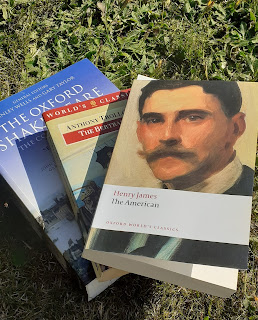 Posted by The Brooknerian at 15:57