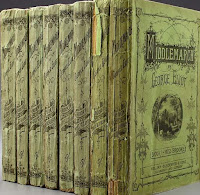 [Part of an occasional series on Middlemarch - Book by Book:]

In chapter 14 Mary Garth teases Fred Vincy with a list of literary lovers. The modern reader is on familiar ground with Ophelia and with Juliet, but things soon become dicey. Mme de Staël's Corinne gets a name-check, along with characters from Goldsmith's The Vicar of Wakefield. Then it's the turn of Scott. Most people have heard of Waverley and Flora MacIvor. But Brenda and Minna Troil, Mordaunt Merton and Clement Cleveland?! My edition of Middlemarch informs me they're to be found in Scott's 1822 novel The Pirate, which surely hasn't been in print for at least the last half-century. Did it have a better reputation in Eliot's time? Very likely. You can sense Scott's influence throughout - not just in the fact Middlemarch is to all intents and purposes an historical novel, but also in details such as the gnomic Scott-style epigraphs, not a few of which Eliot composed herself, just like Sir Walter.

(Scott eventually lost out to Jane Austen, who didn't achieve her current status until the later Victorian period. It's interesting to reflect that her pre-eminence simply wasn't there for the likes of George Eliot or Dickens or even Trollope. They wrote their novels almost as if Jane Austen had never lived, whereas now her influence is unavoidable. Which novelists of today, little regarded now, will be seen quite differently in times to come? I can think of one.)


George Eliot is ever alert to historical change. Of Fielding's age:


But Fielding lived when days were longer [...], when summer afternoons were spacious, and the clock ticked slowly in the winter evenings. (Ch. 15)

We're not far away here from Matthew Arnold's


...strange disease of modern life,
With its sick hurry, its divided aims,
Its heads o'ertax'd, its palsied hearts... ('The Scholar-Gipsy')

though ultra-progressive Eliot takes an altogether more hopeful view of the future, most evident in Middlemarch in the figure of Lydgate, who comes to the fore in Book Two. Yet her vision opens out in other directions, taking in the enjoyable cynicism and worldliness of the entomologist clergyman Mr Farebrother ('I feed a weakness or two lest they should get clamorous' - ch. 17) as a counterweight to the idealism of Lydgate.

In like manner Eliot gives us in Book Two several memorable foreign scenes, which help to leaven the stodgy parochialism of Middlemarch. The Book ends in Rome, that 'city of visible history, where the past of a whole hemisphere seems moving in funeral procession with strange ancestral images and trophies gathered from afar' (ch. 20). But Dorothea's life has narrowed to 'dreamlike strangeness': one thinks of Little Dorrit in Italy, bewildered by sudden unassimilable riches. As for Casaubon, he's rapidly becoming cold and appalling, engrossed in an utterly futile literary project that Eliot, the successful writer, pities as much as she deplores. It will be only a short step (as others have said) from Casaubon to James's Gilbert Osmond.

Posted by The Brooknerian at 13:33