There can be few plot devices more stimulating to the conservative imagination than the arrival of brilliant strangers.  'It is sometimes very moral to change,' says Felix, one of the Europeans in Henry James's novel of that title. But the irruption into established lives of disruptive influences, and the resulting clash of cultures, are often an opportunity merely for the status quo to be upheld, even renewed - at any rate only very subtly adjusted.

One thinks, of course, in this context, of Brookner's Visitors. It has something of the charming summery atmosphere of The Europeans. But really there are numerous examples of Brooknerians who are faced with alternative ways of living. But how much do any of them change, or indeed want to change? And how moral are the changes they so ardently but hopelessly contemplate?

Mrs May, at the end of Visitors, looks back on her recent past: its upheavals have been, after all, merely 'diverting', just as she thought they would be. And now the visitors are gone, and the world can settle to what it was. 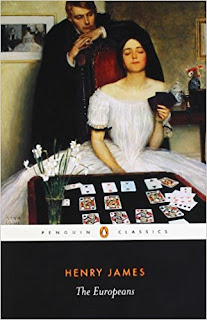 Posted by The Brooknerian at 16:49