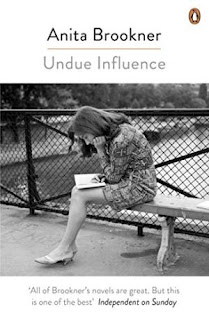 After Undue Influence (1999) there came an unprecedented gap in the publication pattern Anita Brookner had established over nearly twenty years. There was something in 2000, but it was a book of art criticism, Romanticism and Its Discontents. In 2001 the fiction resumed, but Brookner told Robert McCrum she hadn't intended to write the novel of that year. Undue Influence might well therefore have been Brookner's last novel.

We read Undue Influence now, or I do, as pointing forward to the darker novels of the 2000s. For sure it is a bleak tale, all the more so for the breeziness of its opening chapters. The sly author lulls you into the impression that this is some kind of easy-going Brookner-lite, before steadily turning the screw. Towards the end you realise you're keeping company with a narrator who may well be mentally ill, and a writer who's intent on ruthlessly clearing the decks of extraneous plot so that she can concentrate on heaping the maximum humiliation on her hapless protagonist.

How Claire Pitt suffers! Brookner deprives her of every support. I always find very terrible that moment when she considers spending an entire holiday in Hyde Park. The novel's ending, as grim but more concise than the conclusion to Look at Me, never fails to shock, even though on rereading the reader has probably been able to spot the careful way Brookner has seeded the whole novel with clues.

One of the novel's concluding lines:


It was the greatest failure of my life and no future success could ever obliterate it.

- brings to mind again the question of the time scheme. The suggestion here is of a long retrospect, which is at odds with the closer focus at work throughout the novel. But if this suggests a lack of novelistic polish, it also, I think, successfully evokes the unfinished rawness of the heroine's truly terrible experience.

The Brooknerian will now take a break, returning in a week or two with consideration of, among other things, Brookner's relationship with a writer who's currently in her bicentenary year. Yes, just do mention Jane Austen!
Posted by The Brooknerian at 06:15

Email ThisBlogThis!Share to TwitterShare to FacebookShare to Pinterest
Labels: interview, Look at Me, Romanticism and Its Discontents, The Bay of Angels, Undue Influence