Mapping out a deep-down life: The Hotel by Elizabeth Bowen 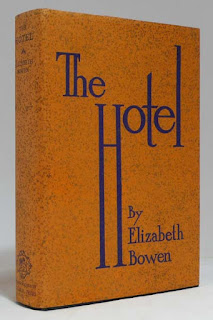 The carnations, among which, walking slowly, she now was burying her face, were scentless, but gave one an acute pleasure by the chilly contact of their petals. She had an armful of two colours - sulphur with a ragged edge of pink and ashy mauve with crimson at the centre, crimson-veined.

Could anyone else have written those lines?

I first read Elizabeth Bowen in my youth. I worked in a library and was attracted by several old hardback editions of Bowen's novels. They had woodcut illustrations and magnificent titles. The House in Paris! The Death of the Heart!

It's even possible I read Elizabeth Bowen before I read Anita Brookner. Truth to tell, I think I found both authors hard to 'get into' at first. I loved, at seventeen or eighteen, Hotel du Lac, but found other Brookners difficult. But I persisted. Likewise I kept trying with Elizabeth Bowen, even when my progress through her novels slowed to a glacial pace. I felt a sense of duty. It was as if, in spite of myself, I recognised true worth.

Later, after a long break, I focused on Bowen's postwar fiction. I have a preference generally for the late or later works of authors. It's the same with Brookner. So I read The Heat of the Day (1949), A World of Love (1955), The Little Girls (1963) and Eva Trout (1968), and liked them all. I was probably ready at last.

What does one look for in Bowen? One looks, I guess, for the evocation of liminal psychological states; one looks for the personification of the inanimate; and one looks for style.

Would I find these in early Bowen?

In a spirit of curiosity about other hotel-set novels, I turned to The Hotel, Bowen's first novel, immediately after my reread of Brookner's Hotel du Lac.

Bowen's novel tells of the lives of a group of English people living in a hotel (usually 'a', not 'an' as in Brookner) on the Italian Riviera. They're a Forsterian bunch: young women, matriarchs, spinsters, eccentrics, a clergyman. Bowen captures the period with precision: the cropped hair and daring short skirts of the girls, the Victorian attitudes of the oldsters, and everywhere the shadow of the Great War.

An early scene involving an excursion into the hills surrounding the Hotel (always capitalised), and an illicit kiss, was almost certainly inspired by Forster's A Room with a View.

Bowen's focus is diffuse, but if there is a central character it's a young woman named Sydney Warren. Bowen is plainly fascinated by her. Sydney is depicted with a 'wild, Beatrice Cenci expression' (ch. 10); she's said to be 'queer' (ch. 5), whatever that means; and her sexuality is the topic of oblique discussion:


Tessa continued: 'Sydney is very affectionate.'
'She is very much ... absorbed, isn't she, by Mrs Kerr?'
'I have known other cases,' said someone else, looking about vaguely for her scissors, 'of these very violent friendships. One doesn't feel those others were quite healthy.' (Ch. 8)

But Bowen's project is nothing so pedestrian. 'What is the good of a new world if nobody can be got to come and live in it?' says a character in chapter 16. That new world is the world after the war, and Sydney surely belongs in it.
As for the Hotel, it functions as the hotel did in Brookner's novel. It creates unusual matches. 'In an ordinary way, in London, we should run miles, I dare say, rather than meet,' someone tells Sydney in chapter 15. There's a similar sense of time in the Hotel being somehow richer than elsewhere, and a little out of joint. 'Hotel time', we learn, is 'reckoned differently' (ch. 16).

In its last quarter the novel seems to threaten to become a conventional romance. Sydney suddenly accepts an offer of marriage, but Bowen (like Brookner with Edith's) has Sydney's best interests at heart. Her handling of Sydney's gradual awareness of her situation is exceptional:


She stood between Tessa and Mrs Kerr as inanimate and objective as a young girl in a story told by a man, incapable of a thought or a feeling that was not attributed to her, with no personality of her own outside their three projections of her: Milton’s fiancée, Tessa’s young cousin, Mrs Kerr’s protégée, lately her friend. (Ch. 23)

The Hotel is, overall, a remarkably confident debut: brilliantly controlled, radical, subversive. 'I'm afraid', says a character at one point, '...that one's friends, however various and delightful they may be at other times, are least interesting ... at these moments when they approximate most closely to the normal. What people call life's larger experiences ... are so very narrowing.' (Ch. 19)

So to my Bowen tests, which the author passes not with flying colours but certainly with plenty of promise. First, liminal psychological states. Take this, from the opening:


Miss Fitzgerald hurried out of the Hotel into the road. Here she stood still, looking purposelessly up and down in the blinding sunlight and picking at the fingers of her gloves. She was frightened by an interior quietness and by the thought that she had for once in her life stopped thinking and might never begin again.

Or this, from chapter 9:


[Sydney] was mapping out for herself a deep-down life in which emotions ceased their clashing together and friends appeared only as painted along the edge of one's quietness.


Her personality had a curious way of negativing her surroundings, so that unless one made instant resort to one's senses the background faded for one and one conjured up in one's half-consciousness another that expressed her better, that was half an exhalation from herself.


...the air was allowed to come in pleasantly through the open windows under green-striped awnings and feel its way, cool-fingered, from flushing face to face. (Ch. 3)

And lastly, style. Notice here the Bowenesque coinage 'excludedness' and the weird deployment of italics:


She seemed, from the desolation, dusk and excludedness of the lounge, to return at least into something. (Ch. 7)

Posted by The Brooknerian at 06:07