I grew impatient with those who wasted [David Copperfield's] time: I saw nothing amusing in Mr Micawber ... I realised why I was so impatient with Mr Micawber. And Dolly was not only Mr Micawber, she was Mrs Micawber as well, hinting that she had come down in the world...

Nothing amusing in Mr Micawber?! When a stranger came on the scene in chapter 11 of David Copperfield, with a 'certain condescending roll in his voice, and a certain indescribable air of doing something genteel', I found myself newly fascinated. I had forgotten how Micawber was introduced, and how early, but I welcomed him as an old friend, and looked forward to his every return. I don't often disagree with Brookner, but on the subject of Mr Micawber I must make an exception. 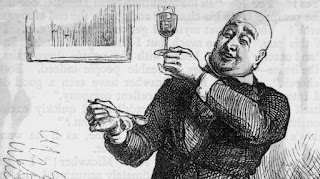 Posted by The Brooknerian at 06:51