I rarely read new things now – rarely visit new places either. But now I was in Zurich, previously only travelled through. I arrived early, and nothing was ready, and it was a Sunday and raining and the streets were empty. Thoughts of panic and flight beset me. But by noon I’d planned the coming days and booked my train ticket to Vevey and my room was cleaned. I was glad of the ideal company of Brookner (A Family Romance) and Dickens (David Copperfield), mightn’t have got through otherwise: I chose my summer reading well this year. ‘I led the same secretly unhappy life; but I led it in the same, lonely, self-reliant manner.’ 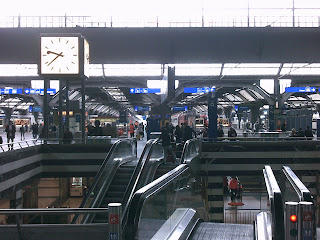 Still half-lost in the unfamiliar streets I at last found my way to the edge of the Zürichsee
and a two-hour cruise: it seemed the Brookner thing to do, and indeed the weather was as it was for Mr Neville and Edith in fiction and on another lake: grey-blue distances, indistinct horizons. I lunched at Rapperswil and returned by train. 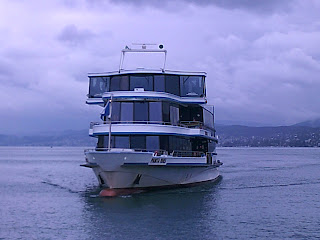 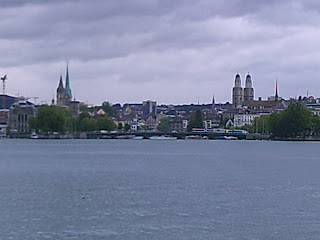 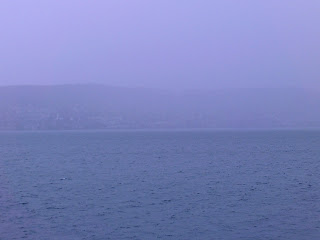 Sated for the moment with David Copperfield I went back that evening to A Family Romance:

I simply read on, willing myself to reach the end of the story, and promising myself an easing of the heart when David finally achieved happiness. When I got to the end I went back to the beginning.

By chapter 6 Brookner has cleared the decks and can focus on her main concerns: her protagonist’s inner life, and the contrasting life of Dolly. Imitate him and pay tributes to him as she may, nevertheless Brookner is an artist quite different from Dickens, whose imagination is enlivened by multiplicity, variousness, a cast of thousands.

To the Kunsthaus, where I found several pictures of interest. I viewed Courbet’s Trout, which Brookner saw at the Royal Academy in London in 1978. She remarked on its ‘agonised human eyes’. 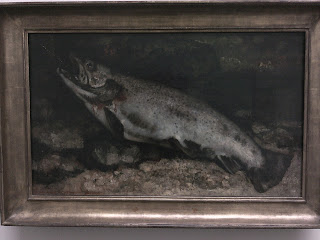 Elsewhere were a couple of Delacroix, an Ingres and a Géricault. I examined Delacroix’s Indien armé d’un poignard Gurkha and Géricault’s Le Maréchal-ferrant.

Neither is especially prepossessing. The Delacroix depicts a moment of exotic danger and drama: the Indian seems poised to attack an encampment of red-coated troops. But he is a type, his individuality withheld or rather untold. Nor is the foliage especially persuasive of the East. The far-off British soldiers – mere staffage – might be bivouacked in Hampshire. 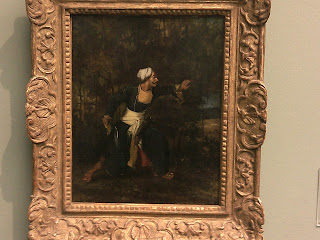 The Géricault, aside from the fact that it appears to have been painted on a bit of old fencing, has more to recommend it. The horse is memorably vital, the blacksmith determined but gentle. The man’s shirt and the horse’s eye, mane, tail and feet provide points of brightness and interest. 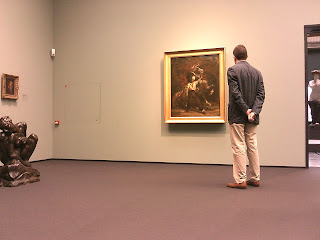 I continued with A Family Romance.

In what abyss of non-feeling did Dolly dwell? She made careful placements of affection, always ready to be withdrawn in a fit of indignation. Her world was loveless, and she craved love as others crave sugar, and for the same reason: to replace a sudden lack, of which she would be abruptly and fearfully aware.

Abysses of non-feeling: in A Family Romance Brookner’s already deep into the magisterial opacity that will mark her late style.

10.00: Journeying via Bern and Fribourg/Freiburg through landscapes of forests and gorges. The day brightens. I start to hear more French than German.

11.15: I’m in Vevey and eating a sandwich outside the station. The town has a relaxed, moneyed, genteel, also a rather dressy feel. One sees Brooknerians everywhere.

12.00: I am expected. My presence is enquired into. I confess my visit’s reason. The girl at Reception listens politely, blandly. No, she hasn't read the book, but has heard of it. But it is interesting, yes? And so nice to read a book and then see the place where it is set? So, sir, I should read the book, yes? 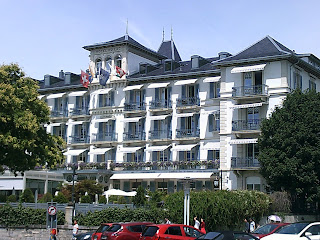 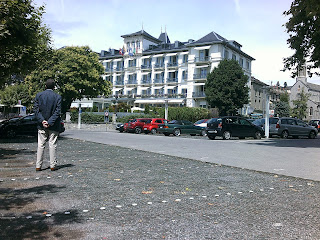 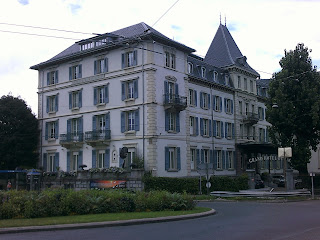 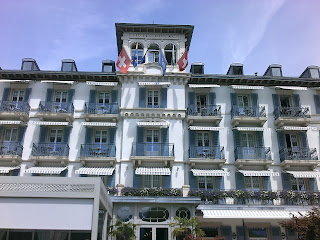 12.30: In my room now. High levels of comfort and finish. Not lake-facing, but third floor – no. 319, a few paces from 307, Edith Hope’s room. I asked about Haffennegger’s, the café mentioned in the novel, but it isn’t extant or known. 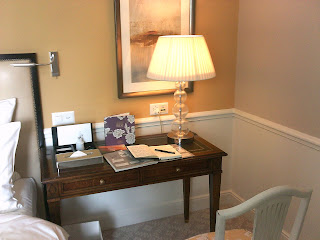 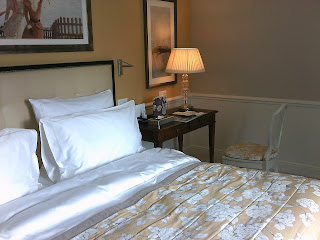 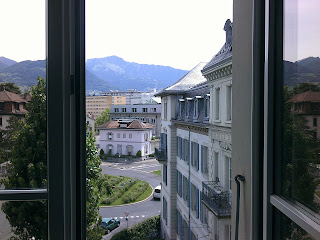 Then I open a drawer in my antique desk and find a printed history of the hotel, which namechecks Brookner quite substantially. ‘Anita Brookner’s heroine Edith Hope … took refuge in the salons, where the softness of the armchairs and an appetising slice of cherry cake allow her to forget her troubles.’

In the novel Anita Brookner drew on her own stays at the establishment in the early 1980s. Peter Ehrensperger [hotel director 1977-2005] lights up as he recalls: ‘She often came to stay and we established a very cordial relationship.’ (‘…nos relations sont devenues très amicales’)

Interviewer: What do you think of the recent transformations in the hotel?
Ehrensperger: Today Anita Brookner would no longer write the same novel. But even at the time the BBC wanted to make an adaptation of her book and found that the hotel was a little too modern.

‘Avec toute mon amitié,’ wrote Brookner in the guestbook as late as 1990.

3.00: I return from a walk into the Old Town. Plenty of antiques shops, antiquarian bookshops, interior design emporia, and knicker stores of the kind the Puseys would have patronised. Again a leisured, wealthy population, milk-fed, slow-moving, benign. 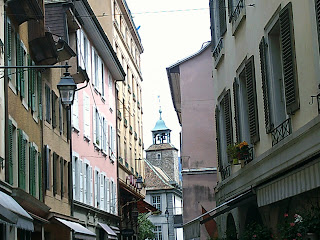 3.50: I wander the corridors of the Grand Hôtel du Lac, hoping for glimpses into lake-facing rooms. Then the marvellous thought strikes me: there is no need to live like this! So I head down to Reception and speak to the talkative girl of earlier. Would it be possible to take photos of the lake from a lake-facing room? She hesitates, then decides my request will be possible. I follow her upstairs to room 306, next door to Edith’s, and I take several pictures inside. I thank the girl, elated but sheepish. 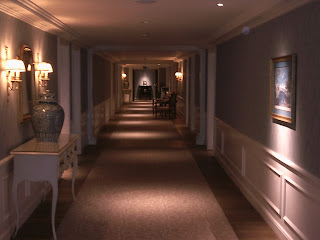 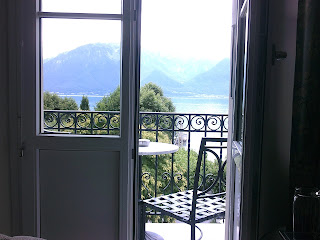 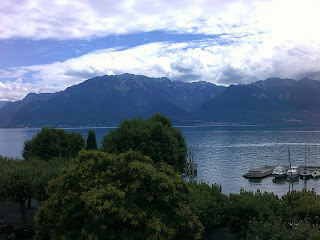 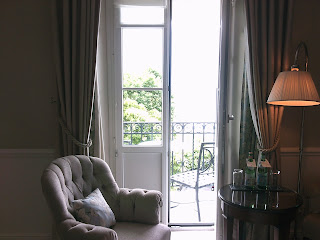 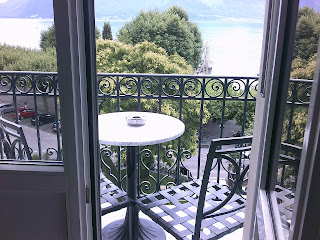 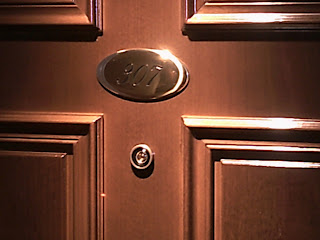 5.00: I walk to the Tour-de-Peilz castle and the Swiss Museum of Games. An exhibition of British sports and games called ‘So British!’ There’s a big display of a game I’ve never heard of, called Hare and Tortoise.

Back at the hotel the salons are deserted. No one is drinking; no one is having tea. A tall young woman, stooping, with a profile like Virginia Woolf’s, is talking loudly to the staff at Reception. ‘No, I’m just looking for my colleague,’ she says in a sharp New York accent. ‘Did you see her? She was here a minute ago.’

8.00: The salon where Edith eats cherry cake and battles the Puseys is unidentifiable. It’s probably subsumed among the three spaces now decorated in opulent late-nineteenth century fashion. I sit among chinoiserie while a pianist with green eye-shadow plays Ludovico Einaudi on an electric keyboard. 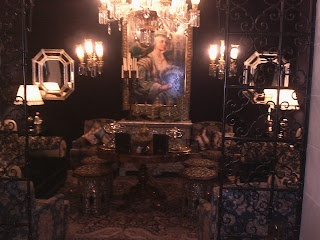 Later: All quiet on the corridors. No mysterious night-time disturbances.

The next morning, neither flat nor calm. Traffic, activity, urgency beyond the veal-coloured curtains. But I had slept well. I ate a gargantuan breakfast and walked along the shore: the lake choppy, the Dent d’Oche partly obscured.

When I left, at ten, breakfast was in full swing. My own had been quiet; I’ve always been much too early for things. But I never got the sense that somewhere in the hotel there might be things happening or an atmosphere of community among the guests. The hotel, since the 80s, has perhaps gone too far upmarket. Its clientele aren’t any longer those discreet persons of long-standing whom Brookner lauds: instead they’re simply rich, and the thought of being rich occupies their every moment, and they give out the basilisk stares of the rich.

Such luxurious, highly regularised, highly corporate hotels are at pains to emphasise their commitment to ‘authenticity’. But is authenticity a preoccupation because its very lack is a true fear and suspicion? Towards the end of A Family Romance Jane and Dolly stay in an expensive hotel in Bournemouth. Brookner’s characterisation of the hotel – ‘commercial, if not downright cynical’ – is at odds with the more benevolent way she depicts the Hôtel du Lac (not yet dubbed ‘Grand’) in her earlier novel. Perhaps that old-time hotel director M. Ehrensperger was correct when he suggested she might nowadays write a quite different novel.

I travelled from Vevey to Geneva for a final day before flying home. The weather was breezy but now very warm. ‘In any event, some sort of natural conclusion had been reached.’ 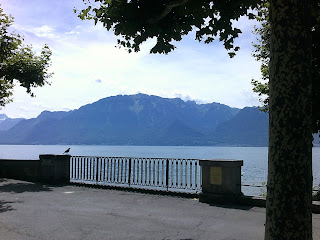 Posted by The Brooknerian at 08:29