When Ford Madox Ford wrote his Fifth Queen trilogy in the 1900s the reputation of historical fiction was on a downward slope. The extreme popularity of Scott in the early part of the previous century had declined gradually but relentlessly. The twentieth century saw the genre consigned to the schoolroom or to those sections of bookshops where the covers are lurid and the often embossed. Then the second half of the century happened and the historical novel was again respectable. Examples won the fledgling Booker Prize. Novels grew in length, scope and depth. Some would no doubt posit Hilary Mantel's Wolf Hall novels as the apotheosis.

Novels are the product of their own historical contexts, and none more so than historical novels. Mantel's Tudor past is perhaps no more authentic than Ford's. Both cover similar grounds. It is all really a matter of taste. Do you favour Mantel's gritty hyper-realism or Ford and Scott's romance? Do you hate tushery and gadzookery, or find it flavoursome when well deployed?

One thing that occurs to me as I read Ford and Scott is how close such novelists were to a later and apparently quite different genre: sci-fi and fantasy.

Most nineteenth-century novelists after Scott tried their hand at the historical novel: A Tale of Two Cities, Romola, Henry Esmond, La Vendee, The Trumpet-Major.

Anita Brookner, not a nineteenth-century novelist, but somehow one all the same, wrote perhaps in similar fashion her own lone example: Family and Friends. But Brookner's grasp of timelines is often troubling: I have explored in this blog the tortured and indeed impossible chronology of Incidents in the Rue Laugier (see here), not to mention uncertainties over the eras depicted in Family and Friends (here).

Ford is a stylist. The Fifth Queen tells an enthralling story, but he's the sort of novelist for whom style matters most. The textual surface on every page glitters with phrasing and word choices that give pleasure. But his world is constrained, delimited. Not a criticism: the Henrecian court is a 'house of eyes': but by contrast Scott, whose style is straightforward if ornate, conjures an imaginative space that seems infinite and lives in the mind long after one has finished a book.

Conrad called The Fifth Queen 'the swan song of Historical Romance', a premature judgement of a genre that would see a revival within the century and indeed never really went away. And who has it right? Was Ford right? Is Mantel? Was Scott? We can never know what the past was actually like. 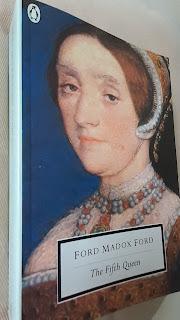 Posted by The Brooknerian at 08:51