The Captain and the Enemy 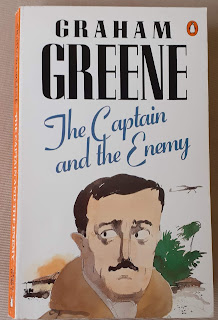 My school librarian (I spent most lunchtimes in the school library), a Mrs Davies, very Welsh, was a literary woman. Gradually down the years one pieces together one's prehistory. She was over the moon when Graham Greene wrote what was to be his final novel, The Captain and the Enemy; she even had a publisher's promotional poster, which she displayed in the library. This was in, I now learn, 1988.

I saw The Captain and the Enemy in a charity shop, and was at once transported. I had to have it. Such discoveries are like reclaiming the lost past.

The Captain and the Enemy concerns a conman. Who else does these plausible figures with such aplomb? Le Carré of course; Brookner has several too: an Ainsworth in Fraud, a Colonel in A Friend from England. An ersatz military moniker is often de rigueur.

Greene's Captain arrives at the narrator's boarding school, claiming to have won him from his father in a game of backgammon. The boy follows the Captain to a fading down-at-heel suburban address, where he lives for the rest of his childhood as the adopted son of a woman named Liza. The Captain visits infrequently, never without a tall tale or a promise of better times just around the corner. Later passages, when the narrator is grown up, take place in Panama (where else?), where the mystery of the Captain at last unravels.

I read most of Greene in my youth, but in recent years I've picked up the odd, less regarded, later novels and found them rather wonderful. The Captain and the Enemy is a bonne bouche, yet with unexpected moments of sympathy and pathos. Mrs Davies had taste.

Posted by The Brooknerian at 16:49