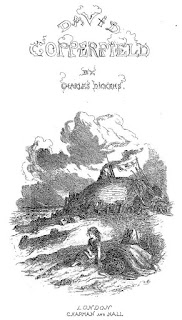 Followers of this blog may remember my main motivation for re-reading David Copperfield this summer. My other reason was a preference for immersing myself in long Victorian fictions during the vacation, but my chief impulse derived from an interest in reacquainting myself with Anita Brookner's A Family Romance, a novel that connects with Dickens's both directly and obliquely.

Brookner, speaking through her heroine Jane, focuses on Dickens's characterisation (though she is aware that such an interest might not pass muster in the academic world). Jane loves Betsey Trotwood, but finds the Micawbers tiresome. She has an almost visceral fear of Uriah Heep.

I too love Betsey Trotwood. Her gradual softening as David Copperfield proceeds, and the story of her doomed marriage, are affectingly told. The characters of Uriah and his mother ('Be umble, Ury! Make terms!') are likewise masterful. Uriah's slipperiness, his writhing and general fishiness, are triumphs of literature.

But I don't agree on the subject of the Micawbers. For me Mr Micawber ranks with Thackeray's Major Pendennis as among the language's finest comic creations.


'Gentlemen,' returned Mr Micawber, 'do with me as you will! I am a straw upon the surface of the deep, and am tossed in all directions by the elephants - I beg your pardon; I should have said elements.' (Ch. 49)

If you don't find that funny, I can't help you. It probably wouldn't work if Mr Micawber was always using malapropisms. It has been said (by Forster, for instance) that Dickens's characters rely on empty repeated catchphrases. The subtlety of their discourse in individual scenes and at the sentence level, and their adaptability to different conversational contexts, are often ignored. Mrs Micawber comes in for particular criticism. Brookner finds her pretentious. Forster presents her as the epitome of what he calls 'flat' characterisation. But what of the last poignant glimpse we get of Mrs Micawber - on board a ship bound for Australia, but even yet looking out for her long-lost superior family, hoping they'll come through for her at last? From comic beginnings Emma Micawber grows in humanity.

I have, I guess, no particular aversion to Dickens's 'sentimentality', though there are moments towards the end that call for some indulgence. I find the scenes with Agnes trying, and I find the last chapters devoid of jeopardy. David is by then a famous and successful man. It's the likes of the emigrants - the Micawbers, Mr Peggotty, Emily - who face true trials, saying goodbye to the last of England. David seems more authentic and sympathetic in the earlier part of the novel, during his catastrophic childhood and youth. No wonder Brookner's Jane Manning in A Family Romance finishes David Copperfield with relief, but at once returns to the beginning.

I shan't be doing that, but I'll return to David Copperfield some day.
Posted by The Brooknerian at 08:26