A Season in Hell

Had you been the reviews editor of the Spectator in Anita Brookner's heyday, what would you have sent her to read? Some selectiveness would have been required.

She tended to get American and British literary fiction, books about writers, anything bleak, and anything French.

Tomber sept fois, se relever huit, by Philippe Labro (as far as I can work out, never translated into English) was reviewed by Brookner in 2003. It was a good match. We don't know whether Brookner ever suffered a crack-up of the kind described in the book and summarised in her review; she never, after all, 'revealed all'; though she admitted to periods of 'inwardness' (see, for instance, her 1994 Independent interview).

But what interests me about the piece are the many Brooknerian connections. We have, for example, the title, 'A season in hell', recalling Rimbaud. We find also a favourite quote from D. H. Lawrence: 'Look! We have come through!', which, I think, concatenates through Brookner's Latecomers. We find a reference to an 'altered state'. And haunting everything is the ghost of Brookner's revered Freud.

Labro's experience might have been rather too extreme for someone of Brookner's sensibilities, but every line of her review shines with sympathy and solidarity. Even in her hack work, Brookner weaves her own mythology, a complex intertextual web. 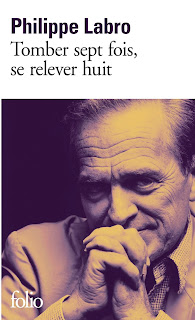 Posted by The Brooknerian at 17:04