Much more interesting than success

Brookner: I read a lot in French and I read the Russians. Here's my favourite novel.
Observer: Oblomov.
AB: Yes. It's about a man who fails at everything.
Obs: I confess I've never read it.
AB: It's great. He fails at everything - not through any fault of his own, but through sheer inactivity. I learnt a terrific lesson there.
Obs: Do you think failure is a subject to which you're drawn in your fiction?
AB: Much more interesting than success.

Brookner, ruefully playful, time and again makes a show of objectivity. She writes about failure because, objectively, it is an interesting subject. These personages are not reflections of herself. As she told Blake Morrison in 1994:


Well, I am a spinster. I make no apologies for that. But I'm neither unhappy nor lonely. I am interested in people who live on their own, people who get left behind, who drop through the net, but who survive. They seem to me quite heroic characters sometimes, but no one inquires about them because they're people who do without much conversation, whose loudest moments are internal. If such characters persist through my novels that's because I don't know much about them, not because I know them too well. I write to find out what makes them tick.

This sounds fairly heartfelt. But the accusations would continue. The 2002 Independent interview features the following, larkier exchange:

The Next Big Thing [writes the interviewer] presents a hero shaken by lust after a lifetime of humbly 'making things better. Seventysomething Julius Herz, the third male protagonist in recent novels, is a self-effacing childhood émigré from Germany. Late in life, he finds release from the family ties that bound him to a solitary stoicism. Passive, obedient, too keen to please, Julius shares more than his Mitteleuropa background with some of his female forerunners. As I list his traits, Brookner breaks in: 'He's me, really. You were longing to say that, weren't you? And I thought I was making him up. That's what happens. That's where Freud is right.'

There is a wry acceptance here, also to be found in the curious and unprecedented 'Author's Note' at the start of Brookner's final novel, Strangers. It is a parody of a common legal disclaimer.

All the characters in this novel are imaginary. But I do not doubt that somewhere, out there, they, or others like them, exist. 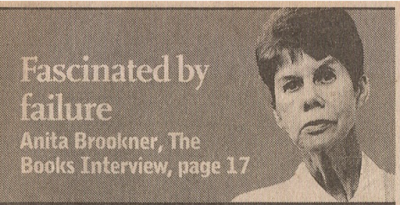 Posted by The Brooknerian at 19:47