The 'great flood-gates of the wonder-world' are swung open: the reader is 'world-wandering' like the crew of the Pequod through the 'lashed sea's landlessness': 'How I snuffed that Tartar air! - how I spurned that turnpike earth!'

I do not read only Anita Brookner. I like to have, in the background, a monumental, old, preferably nineteenth-century novel on the go. This has long been my habit. I don't think any of us would really cope if we were actually transported back to that long-lost time, but I like to think some of us would know some of the ropes.

Moby-Dick, or The Whale, which I'm about a third of the way through, is a departure for me. It reads like Dickens, Joyce and Shakespeare. It's a deeply strange and addictive book. It's also very straightforward, with, as Martin Amis says in his recent essay collection, an enormous amount of padding. It's highly literary ('I have swam [sic] through libraries and sailed through oceans') - as well as being obviously authentic. It has breathtaking language and some astonishing flights of fancy. Last night I read a passage in which the narrator wondered whether the same whale might be capable of being in different oceans simultaneously. I wasn't expecting theoretical physics.

I take the novel slowly, look forward to it. I'm just so pleased to have discovered something new. And one other thing: like many great novels it focuses on a little enclosed world. Greatly to my surprise, it's very cosy. 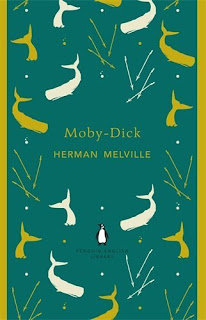 Posted by The Brooknerian at 18:24