One looks forward to those chapters in Anita Brookner's novels when she sends her personages away on holiday. One thinks of Alan Sherwood in Vif, Paul Sturgis in Venice, and any number of characters in Paris.

One such vacation is enjoyed or endured by Anna Durrant in chapter 12 of Fraud. It's January, and brightly cold ('sunshine as ruthless as the workings of the human heart'), and Anna is visiting her old friend Marie-France. But dissent and deception are in the air. Marie-France, after a lifetime's nunlike spinsterhood, has contracted to marry a faintly dubious friend of the family. Anna, excluded, must spend much of her time alone - for which we're surely grateful. Brooknerian wanderings follow, including (of course) a trip to the Louvre.

Eschewing the Romantics' 'great discordant machines', Anna focuses on the portraits of Ingres: Mme Rivière, 'reclining fatly on her blue velvet cushions'; Mme Marcotte, 'in unbecoming brown, her large sad eyes speaking of a physical rather than a metaphysical unease'. Anna can 'almost sense the processes behind' the eyes of the portrayed: the 'discreet gurglings and shiftings in those flawless bodies'. They are, she later realises, portraits of the 'sexual battle fought and won...' We're reminded, in Brookner's reading of the paintings of Ingres, and in her depiction of Marie-France's less than ideal liaison, of this writer's sometimes overlooked commitment to the fallen world, the physical world, the world of the flesh. 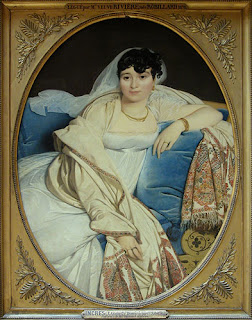 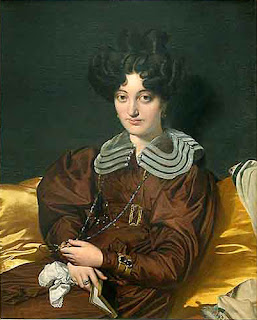 Posted by The Brooknerian at 17:03