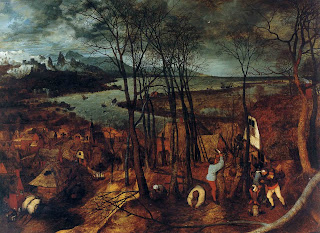 She raised the window and leaned out, trying in vain to catch the smell of turned earth, to sense an emergent spring, but it was too early in the year: the air was sour, lightless.

In the recent Backlisted podcast Andy Miller spoke persuasively of Brookner's narrative technique, likening it to the work of a painter: Brookner gradually fills her canvas, a touch here, a touch there - focusing for a time on a particular area, perhaps returning to it later, and so on. This is seen very much in Fraud, chapter 10: a dream returns Anna and her creator to the story of Mrs Durrant's disastrous second marriage. We might have thought that part of the story done and dusted, but there is still much to be learnt: Brookner is rarely what might be called a chronological writer.

The chapter is painterly in another sense. The depiction of January, and, relatedly, of Anna's desiccated emotions ('In middle life, she knew, the feelings wither slightly, rancour and disappointment replacing earlier hope and expectation.'), recalls (to me at least) Pieter Bruegel the Elder’s Vorfrühling, also known as The Gloomy Day, which is in Vienna. This is surely not too fanciful, as Bruegel is invoked more than once in Dr Brookner's novels, though he wasn't an artist who fell within her Courtauld remit.
Posted by The Brooknerian at 06:03