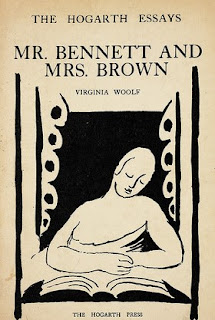 In 1924 Virginia Woolf published a pamphlet called 'Mr Bennett and Mrs Brown'. Mrs Brown was a sample fictional character. Woolf imagined conjuring her out of the ether, and the woman's challenge: 'Catch me if you can.'

Mr Bennett was the popular novelist Arnold Bennett, representative for Woolf of an older generation of writers. He was famous for a range of novels, especially those set in the 'Five Towns' of the Staffordshire Potteries. 'The foundation of good fiction is character-creating and nothing else': Woolf, apparently approving, quoted these words of Bennett's, only to dismantle them in a fashion that affected his reputation for generations to come.

He, along with his confreres Wells and Galsworthy - 'Edwardians' she called them - simply couldn't offer truths about human nature. Only 'Georgians' could, in which camp she placed Mr Lawrence, Mr Forster, Mr Joyce and Mr Eliot. Mrs Woolf too, no doubt. And why? Because 'in or about December 1910 human character changed'.

It's a devastating statement, and delivered with customary acid archness. Virginia Woolf goes on to suggest how the novels of Arnold Bennett et al might approach the problem of the imaginary Mrs Brown. She speaks of Edwardian novels' obsession with the 'fabric of things', with Mrs Brown's material circumstances. '[T]hey leave one with so strange a feeling of incompleteness and dissatisfaction. In order to complete them it seems necessary to do something - to join a society, or, more desperately, to write a cheque.' Bennett's vision of Mrs Brown is archetypal: 'Mrs Brown is eternal, Mrs Brown is human nature'. But Mrs Brown herself, 'an old lady of unlimited capacity and infinite variety', somehow escapes. A new sort of writing is called for: spasmodic, obscure, fragmentary. A sort of writing that might be supplied by a certain Mrs Woolf?

Wells, Galsworthy and Bennett somehow survived Woolf's hatchet job. Bennett has a society dedicated to him, and many of his novels remain in print. I find that 2017 is the 150th anniversary of his birth. But before now I've never actually read him.


And so was brought to a close the complex chain of events which had begun when Theodore Racksole ordered a steak and a bottle of Bass at the table d'hôte of the Grand Babylon Hotel.


I don't think I'm guilty of any spoilers in starting this review with the last line of what amounts to a mystery novel. Except that the incongruous order of beef and beer, which, when haughtily declined, prompts the American millionaire Racksole to purchase the whole hotel, is merely coincidental with the coming to fruition of the rightly named 'complex chain of events' - a fairly preposterous set of conspiracies involving European princelings, the millionaire's plucky daughter, disguise, revolvers, secret passages, Jewish financiers (the novel is casually antisemitic), and high jinx on boats at sea.

It's a thriller. It's a potboiler. It's what Graham Greene would have called an entertainment. It probably wasn't the Bennett novel Virginia Woolf had in mind. But it might have been. I can see what she meant about his handling of character. He gives us plenty of solid detail, but characters' interior lives are those of types rather than of real people. This has the effect of making them oddly unmemorable. The Grand Babylon Hotel (1902) is, like all such books, probably best read 'in one sitting'. But I'm too slow a reader for that, and it's a problem here. For example, I read one chapter one day about a woman in a red hat, and the next day I picked up the book again and read the next chapter, and the woman was referred to, and I found I had no memory of her at all.

Bennett is at his strongest in his depiction of setting. The hotel (I read The Grand Babylon Hotel as part of my 'hotels in literature' series), a vast palace on the Embankment, is vividly present, as are other locations, including Ostend.

The Grand Babylon Hotel seems to have a stubborn resilience in print, and this will probably continue. There will always be people, fans of John Buchan and Sir Arthur Conan Doyle, who like this sort of thing and thrill to Bennett's belief that 'human nature remains always the same, and that beneath the thin crust of security on which we good citizens exist the dark and secret forces of crime continue to move, just as they did in the days when you couldn't go from Cheapside to Chelsea without being set upon by thieves' (ch. 10).

But I don't think I'll be reading any more Arnold Bennett. As ever - bravo, Mrs Woolf!
Posted by The Brooknerian at 07:53