I chose out of the way places, out of season: almost any town in France or Germany, however devoid of scenic interest, provided the sort of ruminative space which I seemed to require.

1.
To Düsseldorf: out of the way, though in season. To the Kunstpalast, in rain, under a heavy sky. Some Cranachs, older and younger, some Rubens, one or two Caspar David Friedrichs, some very engaging nineteenth-century history paintings, some Kirchners. But altogether the collection seemed slightly at a low ebb. Unprepossessing building: red-brick, monumental, 1930s: 'degenerate art' was exhibited here once, for purposes of ridicule.

2.
Chapter 40 of David Copperfield. Mr Peggotty - a wanderer in search of Little Em'ly - speaks of his journey through France and into Italy. He returns via Switzerland, responding to a tip-off. As with other pre-aviation era narratives, one is aware here of the great distances involved, the sense of the Alps as a barrier to be overcome. One thinks of the Dorrits travelling south, or of Palliser and Lady Glencora on their wedding tour.

3.
To Cologne, to the Wallraf-Richartz Museum. I know it well and like the layout. A room of Courbets: Lady on a Terrace (1858), Breakfast after the Hunt (also 1858), The Beach (1865) and Château de Chillon (1873). The Beach is particularly fine, could be a piece of abstract expressionism. 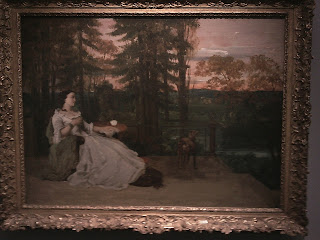 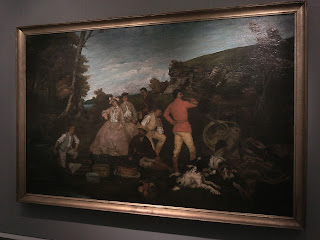 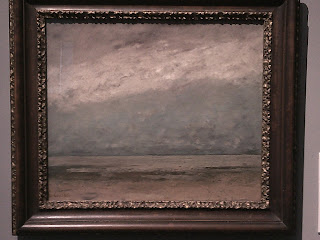 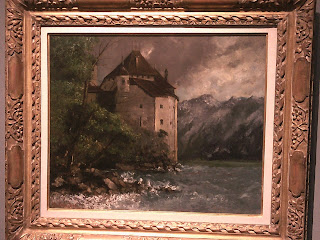 (Brookner, when she saw an exhibition of his paintings in 1978, commented not wholly approvingly on the sleepiness and duskiness of Courbet.)

Cologne in summer had a party atmosphere: dense crowds, wedding parties, costumed stag and hen groups. I was once in Cologne at Christmas, and outside the cathedral were gathered hundreds of children dressed up as the Three Kings. I was there another time, during the carnival, and I was the only person not in a lurid costume.

4.
To Bonn, to see the Beethoven statue.


Beyond Kentish Town lay Cologne, their Sunday drives to Bonn to contemplate the statue of Beethoven... 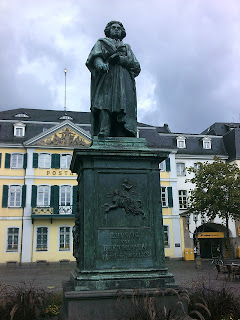 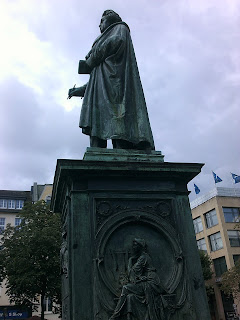 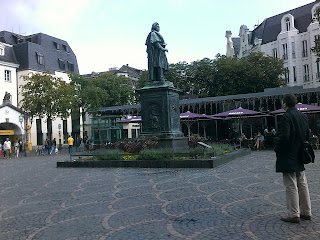 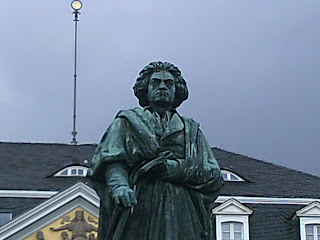 Bonn has other Brooknerian associations:

'At first all went well; we had a beautiful house in Poppelsdorf, a suburb of Bonn, and Alois's sister, Margot, was very welcoming and attentive. The surroundings were pleasant and there were servants who looked after everything, so that it was quite easy to adjust after life in the hotel.'

From the Hauptbahnhof I walked down Meckenheimer Allee, past townhouses, mansion blocks, trees meeting in an archway over the narrow road. An air of Sunday calm. Ghostly, fairy-tale dwellings. My pictures don't do justice to the quality of the light. 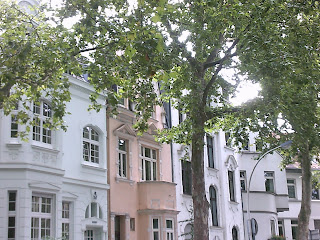 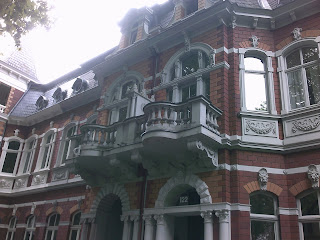 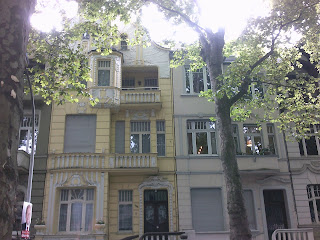 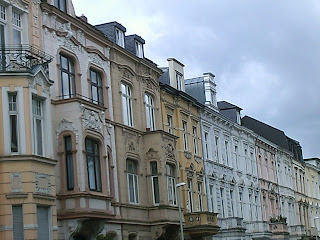 5.
To Frankfurt: I took a break from Dickens and read James's The American Scene. It's the most dazzling and difficult of James's works, and a glass or two of something or other usually helps. I read of 'impudently new' New York, the skyscrapers like extravagant pins in a cushion, the boats on the Hudson moving like bobbins in a great tapestry. All the while, on screens, today's America underwent an eclipse.


6.
David Copperfield again: Mr Peggotty is still questing after Emily, who absconded with Steerforth. At no point is the possibility properly entertained of Emily's agency in the affair, though Mrs Steerforth is roundly condemned for suggesting Emily 'seduced' Steerforth. The narrative, the discourse, has only such terms. And Emily must be found and saved - and she shall be thankful for such salvation. Now we learn she's left Steerforth, and David fears she may have ended up on the streets. The precise nature of such a life is conveyed by Dickens with dog-whistle subtlety. How sad and limited Little Em'ly's options are, and also how limited are the ways in which her story is presented.

7.
To the Städel Museum, one of my favourite collections. A good set of nineteenth-century paintings and a fine range of Old Masters. Also a floor of post-1945 art. The museum's small exhibition space is often well used, offering detailed, quite specialist shows. On my last visit I saw some Watteau drawings. This time: another Brookner fan-pleasing show: French lithographs by, among others, Delacroix (Shakespeare illustrations) and Géricault (typically challenging subject matter: a beggar, a bare-knuckle fight, soldiers in retreat from Moscow).

In the main collection: a View of Frankfurt by Courbet, and a photo by Julia Margaret Cameron of Mrs Herbert Duckworth, later Virginia Woolf's mother. Oh, Mrs Ramsay! 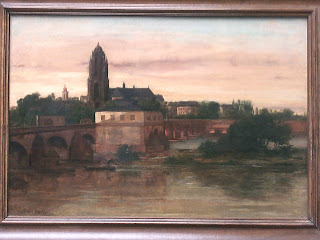 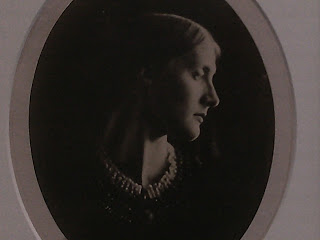 And to prove I don't only look at old art, here I am (with Warhol's Goethe) reflected in a work comprising a wall of mirrored tiles: 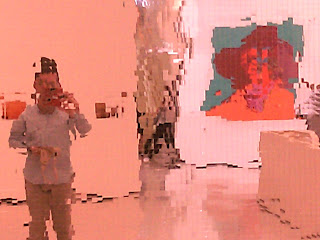 8.
Going back to Düsseldorf after several days in Frankfurt felt like returning to a gentler world.

The natural banks of the Rhine at Düsseldorf: 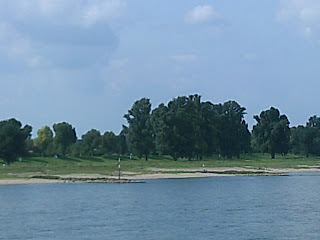 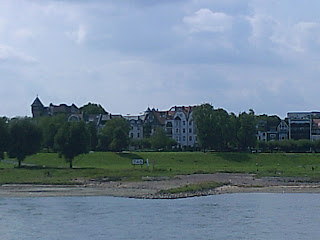 I thought I might give the Kunstpalast another look, and indeed I was better disposed towards it. This time I found an exhibition of Andreas Achenbach's paintings and drawings, the same show I saw in Baden-Baden last year: scenes oddly full of the atmosphere of the Yarmouth sections of David Copperfield: shore life, fishermen, shipwrecks.

A highlight of the collection proper, though made little of, is Cranach's Das ungleiche Paar / Der verliebte Alte (c. 1530), nowhere near as exquisite as the Frankfurt Venus but still stylishly planar and yet very human. One thinks of George Bland and his reckless passion for Katy Gibb in Brookner's A Private View. Brookner's comparison is with Tintoretto's Susannah and the Elders in Vienna, but it could be this too. 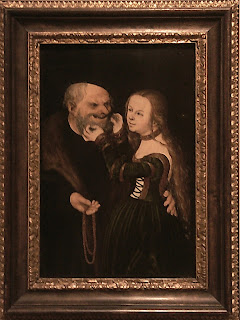 Posted by The Brooknerian at 13:59