Three years at Oxford and nearly five in Paris should have alerted me to the notion of courtly love, but I rather think that even if I had been acquainted with it, had grown up believing in minstrels and troubadours, I should not have recognised my own behaviour, which had more in common with the Middle Ages, even the Dark Ages, than with the twentieth century.

I quote this passage largely as an excuse to share one of my favourite paintings. I saw it again in Berlin recently. It is one of Moritz von Schwind's 'picture novellas': The Rose, or the Artist's Journey (1846-7). 'The hero', wrote the painter, 'is the last musician, a man of lofty ideas' and yet 'a ruined genius'. My guide to the Alte Nationalgalerie reads:

The viewer can guess what longing will be awakened by the dropped rose. Disillusion was a central theme in Schwind's work. 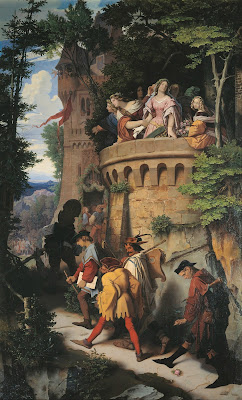 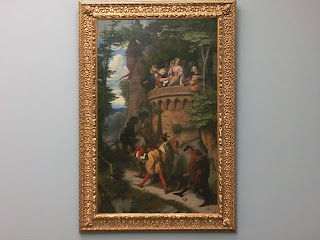 Posted by The Brooknerian at 06:02