'What?' I asked him, startled.

'One of those marvellous eighteenth-century women, I forget which one. Madame du Deffand, no doubt. She blamed no one for not loving her, said she was too - what is it? - Just? Fair? - for that.'

It's not a quote that's on everyone's lips. When I typed it into Google a moment ago, Altered States was the only hit. It must result from Brookner's early reading, those youthful years she spent in the old Bibliothèque Nationale in the rue Richelieu, reading her way lengthways and widthways through her cherished eighteenth century. (There's a piece in the TLS somewhere, in which Brookner writes about the library, including mention of the day she was the recipient of a large bunch of flowers. I have in my notes a mention of the article, but no longer a copy.) 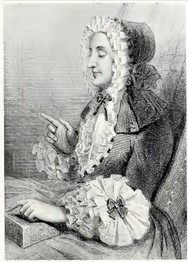 Posted by The Brooknerian at 07:57