The mid-eighteenth fashion for sensibility - sensibilité, as Brookner calls it - will be familiar to English students like myself, bringing back memories of being force-fed Richardson's Pamela, Henry Mackenzie's The Man of Feeling and, with more enjoyment, Sterne's A Sentimental Journey. Sensibility soon became a sort of cult, ripe for send-up by Jane Austen, but at its start it was less a rejection of than a complement to Enlightenment reason, as well as being a rehearsal for Romanticism. 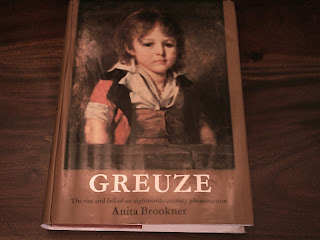 Brookner's focus in Greuze: The Rise and Fall of an Eighteenth-Century Phenomenon (1972) is largely art-historical; she places sensibility more precisely 'between the more important and recognizable styles of Rococo and Neoclassicism'. At the same time she traces in some detail the movement's origins in the religious conflicts of the previous century and the earlier eighteenth. Traditional piety, thrown into disrepute, left a gap, a gap filled by the likes of Jean-Baptiste Greuze's moral homilies. But the original idea of sensibilité, Brookner tells us, 'became gradually obscured by the penumbra of sensations it aroused'. It grew mystical, amoral, licentious. The granting of a preeminent status to the life of the senses excused a multitude of sins.

Let us consider sensibility in Brookner's novels. She has her affecting scenes, often involving sickbeds and deathbeds. There's one in chapter 9 of A Friend from England, as Dorrie Livingstone suffers and recovers in the London Clinic. Not that irony is in abeyance; we would hardly expect that of the novel's spiky narrator. But other Brookner scenes are as sentimental as the Greuzes below. One thinks of moments in A Family Romance or the ending of Look at Me, as the old retainer Nancy takes care of the defeated Frances.

The early Brookner of Greuze is no fan of sensibilité, nor indeed of Jean-Baptiste Greuze: 'His paintings,' she says at the outset, 'with certain exceptions, appear to us tawdry, if not obscene ... he appealed to a vein of feeling that has now become extinct'. That was in 1972. I think we're less stringent now, and (for good or ill) more sentimental, and I think too that Brookner in the novels that were to come, and which she perhaps didn't have an inkling of in the early Seventies, grew more accepting, more compassionate, more sensible.

Posted by The Brooknerian at 14:11

Email ThisBlogThis!Share to TwitterShare to FacebookShare to Pinterest
Labels: A Family Romance, A Friend from England, Greuze, Jane Austen, Look at Me, Samuel Richardson, sensibilité