The Bay of Angels

Observer: First, what is The Bay of Angels about?
Brookner: It is about the sort of misfortune that can come upon you without warning, which finds you totally bereft trying to get yourself out of it.
Obs: Was there a particular moment of inspiration ?
AB: Well, the curious thing is that I didn't intend to write it. I didn't know I was going to write it, so it came upon me quite suddenly and quite easily and I enjoyed writing it. I'm sorry if it's very bleak. I'm sorry if it's mournful. I had a good time, that's all I can say about it.

The Bay of Angels (2001) could easily walk away with the award for the bleakest Brookner ever. It terrifies the reader early on with a condensation of various Look at Me-style plots (see also a previous post). The main plot hasn't got going, and already we have things like:


But I also knew what it was to be unconsoled, to go through days which were somehow not on record because they were not witnessed. (Ch. 6)

Then, in Chapter 7, Brookner turns the screw. Zoe's stepfather dies, and her mother suffers a breakdown. She is admitted to a hospital of sorts, and sedated, a state of affairs left more or less unquestioned by both Zoe and Brookner. Whereas the earliest parts of the novel were concerned with fairy tales, with their promise of a happy ending, now the narrative observes a different, twisted, almost Kafkaesque logic in which there is no possibility of a good outcome. Zoe's home in Nice is repossessed in a scene of great horror. Her stepfather's wealth turns out to have been largely illusory. Even the purchase of a radio incurs maddening complications: 'I felt once more ... that my life was being infinitesimally impeded' (Ch. 12). Meanwhile Zoe's mother continues her transformation into a 'stranger', a word Brookner uses several times, as if preparing us for the concerns of her 2009 novel.

The Bay of Angels is, for Brookner, unusually well patterned, rich in binary oppositions: Nice and London, freedom and captivity, outdoors and indoors, youth and age:


What courage it must take to grow old! And she was growing old in exile, as I should, in exile from our own lives. (Ch. 12)

I saw the perverse strength that lack of intimate satisfaction can bestow. Quite simply, he had left his youth behind. I should now have to do the same. (Ibid.)

(Dr Balbi, he who has left his youth behind, is a curious character. We know Brookner knew Villette. Dr Balbi is M. Paul reborn. There were times I got genuinely confused - in my mind mixing up Brookner's narrative with events in Bronte's novel.)

In conclusion, The Bay of Angels is a virtuoso, difficult, extreme, odd novel. Brookner wrote it after a break in the annual routine she had maintained from 1981 to 1999. She may indeed not have intended to write it. It begins the sequence of novels that conclude Brookner's career: novels less predictable, less even, almost less assured than what has gone before. I didn't like these books much when I read them on publication. They seemed like rehashes, 'for the fans'. Now I see them as breaking new ground. This is Brookner throwing caution to the wind. This is Brookner approaching the endgame. 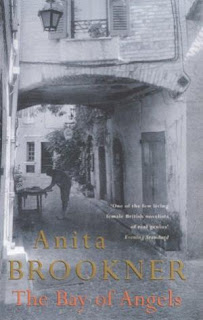 Posted by The Brooknerian at 18:21