I come now to a treat for Brooknerians. I have a copy of a pamphlet, Brookner's 'Jacques-Louis David: A Personal Interpretation' (London, 1974): it is the text of a lecture given by Dr Brookner. 'Lecture on Aspects of Art, Henriette Hertz Trust, of the British Academy', reads the title page. I bought it some years ago at a Gerrards Cross book fair for £25. The lecture was read on 30 January 1974: it seems to be a condensation of Brookner's study of the painter – whom I also rate highly, and whenever I’m in Brussels I always like to look at the Davids.

And one thinks of was-it-Providence? – that make-or-break lecture Kitty Maule must make before an august assembly. Was this that lecture? Probably not. The date’s too late. By 1974 Brookner was an established art historian. The pamphlet is dedicated to Anthony Blunt, not yet unmasked, and is part of a lecture series that includes 'Some Uses and Misuses of the Terms Baroque and Rococo as applied to Architecture' by that slippery grandee.

But what thrills me is a piece of Courtauld Institute headed notepaper inserted in the pamphlet. And in Brookner’s distinctive scrawl: 'Louise – with much love, Anita.'

It was written, I reckon, with one of those Papermate felt pens that were popular in those days. And oh, the pleasure of holding this small thin sheet of paper, all these years later, in this unimaginable future!

And this was all before she, Brookner, even wrote a word of fiction – before she so much as stealthily sat down to begin the project of her life. 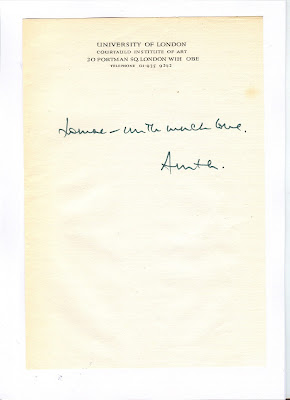 Posted by The Brooknerian at 12:15