Goncharov's Oblomov is referred to twice in the novels: memorably at the opening of Visitors and also (I think) in A Friend from England. In interview Brookner called it her favourite novel. This was possibly a posture. It is a weird contrarian comedy about a Russian aristocrat who deliberately mucks up his life, failing at everything.

'Brookner is in the Chekhov league,' said A. N. Wilson of Undue Influence. (For more on A. N. Wilson, see an earlier post, 'Anita died. I read it in The Times...')

'More memorable than any fiction was Chekhov's Last Moments by Leo Rabeneck, published in the TLS for 2 July 2004,' wrote Anita Brookner in the Spectator's 'Books of the Year' that year. 'Rabeneck was present at this most iconic of deaths, and his account of how it took place - after that glass of champagne - is more than consoling: uplifting.' 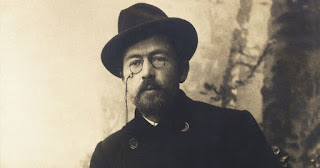 (As you might expect, I sought out the piece. It describes Chekhov’s stylish death, after that glass of champagne, at the Hotel Sommer at Badenweiler in the Black Forest. In fact it’s a rather undistinguished piece, so why did Brookner love it? Perhaps because what was being telegraphed, as ever, was the sort of behaviour of which Brookner approved: the sort of person, the sort of world. One could imagine Brookner in such an hotel: in middle-Europe, among over-dressed, over-civilised, neurasthenic folk. I have seen them myself. I have holidayed many times in Germany and Austria and Switzerland. One is much more likely there than in deadly England to come across Brooknerians. I like to watch them as they sip coffee on sun-terraces, or wander around art galleries, or take a turn about a lake – and I feel at home, I feel I have come home. It is not a feeling I’m in the habit of experiencing very often.)
Posted by The Brooknerian at 07:46