Though not Brooknerland this time. To Zurich first, and the top of its local mountain, the Üetliberg, where I stayed. This involved a train ride and a steep trek through a forest.

In the city I revisited the Kunsthaus, admiring this Rubens sketch of Orpheus and Eurydice leaving Pluto and Proserpina - such a range of emotions so swiftly depicted - 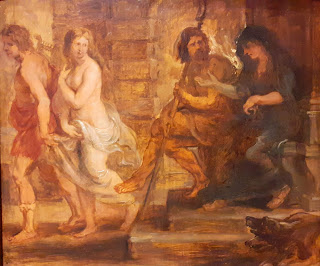 and drama of a different kind in this large, almost monumental Vuillard - the planar masses crowding and bulging, the figures trapped and overwhelmed, and yet alive and throbbing in their still potent domestic maelstrom:

Later I mooched about a huge open-air fleamarket and bought these cartes de visite for two francs each. Their reverses are fascinating. Several are addressed to 'Elsa' or 'Else'. One is from 'Amelie', another from 'Clary Barth', a third from 'Judy Bietenholz'. All employ the phrase 'soeur de pension': they were friends at a girls' school, and the photos were holiday or Christmas gifts. They date from 1906. A whole vanished world is evoked and I am put in mind of the antique European lives in several of Anita Brookner's novels. 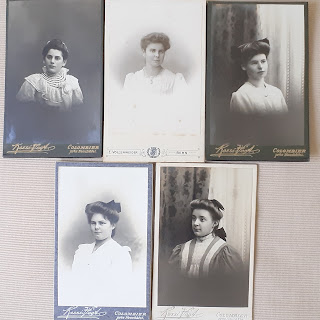 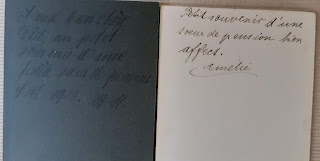 In the evening, stepping out like Major Pendennis, I took a sedate turn about the resort, which was thronged. I paused in the bar of the Metropole, a hotel I've stayed at many times. In the restaurant upstairs sat the usual mix of foreign and English guests, the English anxious, ageing, and haggling about tap water and what was in the salad. I walked in the gardens of the Kursaal - the flowerbeds dim and intense in the twilight. I am often so seduced, put in mind of scenes in literature. But then one goes beyond, behind - and sees how everything is false, gimcrack. I can never quite endure the faces of the folk who staff such places.

I've never really read Byron, but often fantasise about doing so. Sitting outside a pub, waiting for his evening to begin, Kingsley Amis once read Don Juan and thought it wonderful, until he realised he was merely getting drunk. I thought about Byron as little trains and cable cars took me into the mountains above Interlaken and up the Schilthorn, where James Bond associations were being milked for all they were worth. The Piz Gloria station is where On Her Majesty's Secret Service was filmed. Now even the loos are themed ('Bonds', 'Bondgirls') and recorded snippets of dialogue - 'Well, hello, Mr Bond!' - issue from stalls.

The clouds lifted enough to reveal the classic trio: the Eiger, the Mönch and the Jungfrau. It took me back, that view, to my relative youth: I would vacation in the region every other year, staying at the Metropole. And I remember what I read: Pendennis, Is He Popenjoy?, The Claverings. This time I read Confidence by Henry James.

Posted by The Brooknerian at 06:58