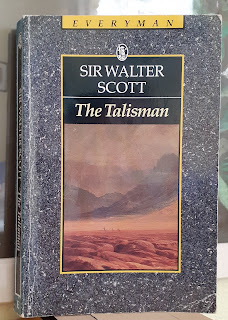 The place is Syria, the time the past - the era of the Crusades - and a 'long row of tents and pavilions, glimmering or darkening as they lay in the moonlight or in the shade, were still and silent as the streets of a deserted city'. On to this exotic, enchanted scene steps a no less fantastical dwarf, 'like an actor entering upon the stage'. And this is the key to Scott and to The Talisman in particular, a tale of Richard the Lionheart, a brave Scottish knight, a hermit, Saracens, veiled ladies and dropped tokens of love.

It's heady and theatrical throughout, and I fail to see why it shouldn't be constantly in print. But perhaps the subject matter is too strong for these days. Yet the portrayal of Islam is often noble and positive; indeed, one marvels at Scott's knowledge of the East, which must have felt much more distant in 1825 than it does today.


Even Sir Kenneth, whose reason at once and prejudices were offended by seeing his companions in that which he considered as an act of idolatry, could not help respecting the sincerity of their misguided zeal, and being stimulated by their fervour to apply supplications to Heaven in a purer form, wondering, meanwhile, what new-born feelings could teach him to accompany in prayer, though with varied invocation, those very Saracens, whose heathenish worship he had conceived a crime dishonourable to the land in which high miracles had been wrought, and where the day-star of redemption had arisen.

Sir Kenneth is the norm, the Saracens the other; and yet there is an undercurrent of uncertainty, a saving subtext struggling beneath the restrictions of the convoluted syntax.

The novel's opening sections are magical, archetypal: a brave knight riding alone, an alliance with an emir, a trek into the hills to meet an ascetic. The novel continues strong but in a different vein as King Richard and his wife Berengaria, shifting allegiances and expediencies, politics and court intrigue, take the stage. The King and Queen are complex and human. As elsewhere, Scott presents his characters as if casually and seemingly unplanned. They develop over time and out of circumstances. The effect is cumulative. And all is rendered in Scott's slow, at times ponderous, but also intensely relaxing and comforting prose: a perfect balm for anxiety.
Posted by The Brooknerian at 11:21