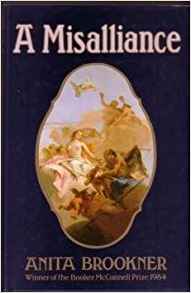 Look in any British bookstore and you won't find it. In fact I don't think it's been in print in the UK since the 1980s. It was Brookner's sixth novel, published in 1986, and it was the first to receive a significant degree of negative press. The Paris Review interview tackled this with Brookner, who spoke out against the often personal nature of such criticism, but suggested A Misalliance 'wasn't a very good book, but it wasn't that bad either. I've written it off'.

It has remained in print in the States, where it enjoyed a more favourable reception. Its 'Jamesian' qualities were praised - 'which I would not have dared to presume'.

It represents, perhaps, a turning point, and as the Paris Review exchange makes clear, the character of the protagonist is the main issue. The interviewer finds her boring and irritating; Brookner calls her 'aseptic'.

There is certainly, from the off, a sense of authorial distance. This is a new type of heroine. Blanche isn't the 'lonely spinster' lazy critics had perhaps come to expect. She's a divorcee. This is the first of Brookner's meditations on marriage.

It is also, even more than its predecessors, a notably stylish novel. One can understand the Jamesian tag. In the first chapter Brookner evokes the 'stony fastness' of Blanche's mansion flat, and her memories of holidays in warmer climes, with a brilliance that marks a new self-assurance. She's also confidently aphoristic:


The only child of parents long since dead and almost forgotten, Blanche had begun her apprenticeship of living alone from an early age, and was thus an expert. An expert is not necessarily contented with his or her expertise, and Blanche found her skill sorely tried as the days grew longer.


(I wonder: did Anita Brookner herself place some kind of embargo on A Misalliance? Authors have been known to make such rash decisions. Look at James, who wrote off The Bostonians. (He excluded The Sacred Fount also from the New York Edition, but that's very much more understandable.))
Posted by The Brooknerian at 06:40