What would he make of Brexit? 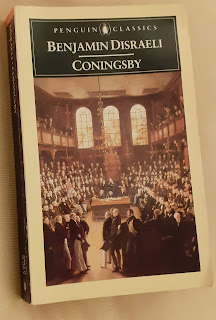 The political agitation which for a year and a half had shaken England to its centre...


So begins an early chapter of Coningsby - not a novel about the battles of today but about a past constitutional upheaval and its consequences, the passing of the Reform Act of 1832.

Coningsby (1844) is, in parts, an addictive read if, like me, you're something of a political geek. But as a novel it fails.* Its characters are shallow, artificial, irritating, either uttering blandly witty aphorisms or acting as mere mouthpieces for policy positions. It is unpersuasive to argue that the fate of a nation may be as compelling as that of an individual - or I, at least, find it unpersuasive.

And I confess I bailed out. Oddly I found myself looking forward to Disraeli's long chapters on the politics of the 1830s, and rather dreading those following the lives of Coningsby and his Etonian pals, their arch conversations, their boring cynicism, their moments of sickly romanticism. Perhaps I should read more pure history.

On the birth of the Conservative Party out of the leftovers of eighteenth-century Toryism, Disraeli is intimately knowledgeable. Disraeli's Conservatism - pragmatic, managerial, adaptable to circumstances, never dogmatic or ideological, never fervid, and, most important, professing a belief in 'One Nation' - seems more and more bewilderingly divorced from its present-day manifestation.


*Unlike Trollope's Palliser novels, which more deftly balance and interweave the personal and the political.
Posted by The Brooknerian at 08:25