The Great Desert of Life

He had nothing to do, his occupation was gone, and it seemed to him that he should never find it again.

He had nothing to do, his occupation was gone, had simply strayed and lost itself in the great desert of life.

The days before him were empty, and the emptiness was as much of a burden as it had always been.


The curiously downbeat ending to The American takes the reader by surprise. Newman has lost his great love, but surely he'll be reunited with her by the end? This is a nineteenth-century novel! But time passes, and he wanders listlessly around Europe and America, his malaise not so much tragic in a Shakespearean way ('his occupation was gone' echoing a line in Othello) as proto-Existentialist.

Brookner's Sturgis suffers a similar dying fall as he gathers up what remains to him at the end of the author's last novel Strangers. Like Newman, Sturgis wanders aimlessly, though less extensively. But Sturgis is truly old, as only modern people find themselves to be old, whereas James's old man is merely in his forties.

Once more I side with the greater riches of Henry James's 1907 New York Edition of The American, especially in the masterly closing moments. And I am pleased to have been treated to a copy of Henry James's New York Edition: The Construction of Authorship, which, years back, I remember looking through whenever I visited the old Border's in Oxford Street. A series of essays, it takes in several of the gloriously wilder outposts of 90s scholarship. 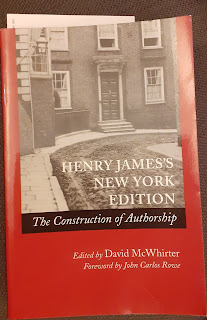 Posted by The Brooknerian at 06:37