'Barchester as we knew it was dead' 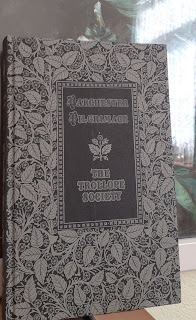 About thirty years ago I worked in a library and was not a reader of Trollope. But, shelving, I grew familiar with titles. Our Trollopes seduced me with their covers, their titles, their quantity. Most were World's Classics editions, and years later I have assembled my own collection:

I read Trollope over many years. I read the Barsetshire series haphazardly, retaining an impression lacking in detail. Barchester Pilgrimage (1935) is the work of a man of much more detailed (though not always accurate) Trollopian knowledge, Ronald A Knox, a well-known man of letters in his time, a Catholic priest, and the subject of a biography by Evelyn Waugh.

It's essentially 'fan fiction'. Knox takes the characters from Trollope's novels and depicts their lives and those of their descendants in the later Victorian age and into the twentieth century.

Ronald Knox's pilgrimage is less a sentimental journey than a twee and rather sad one. His 'modern' Barsetshire is a fallen paradise. If the project has a virtue, it is to return the reader to the original.
Posted by The Brooknerian at 11:33