The skill with which John Banville deploys Jamesian vocabulary and syntax in his recent James-inspired novel Mrs Osmond (2017) is constantly stimulating and often brings a smile to the grateful reader's lips. It is the principle pleasure of the book. I'm interested by Banville's use of the word 'vastation', meaning spiritual emptying. Has he been reading Brookner?

Brookner uses the word in her novel Visitors (1997). A character lies sunk in an armchair, as though subject to a 'Jamesian vastation'.

In a review in 2005 of Hilary Mantel's Beyond Black, Banville refers to Mantel experiencing 'by her own account' a Jamesian vastation at the age of seven. I cannot date Mantel's account.

But Henry James doesn't use the word (though in Notes of a Son and Brother we read of the author being 'vastated of my natural vigour').

('Vastation' in fact derives from the work of Emanuel Swedenborg, the Swedish mystic to whose doctrines Henry James's troubled father was devoted.)

(A tip for whenever you next update your dictionary (if you have one, these days): look up 'vastation'. If it's present, the dictionary's a contender; if not, then it isn't. Never fails.) 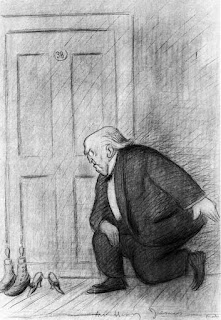 Posted by The Brooknerian at 16:53