A 'pure' novel, said Anita Brookner in interview, should cast a moral puzzle; everything else is mere negotiation. '[T]o follow a scruple to its ultimate conclusion is Edith Wharton's whole concern,' she writes in her Introduction to that author's novel The Reef. '[I]t is a chance to see what can be achieved in the pursuit of moral truths.'

Brookner's 'Wharton phase' centred on the 1980s, when, following her Booker win, she was much in demand. She wrote Introductions to The Custom of the Country and to two volumes of Wharton's short stories. In 1994, when she introduced the 'less popular, and indeed less well known' novel The Reef, Brookner's star was arguably on the wane.

How do Brookner's Introductions read? Do they, as some have claimed, feel like essays on her own fiction? Certainly the Introduction to The Reef is different in emphasis from the earlier Intros cited above, which are happy to recount the details of Wharton's life and to give quotable summaries of her various plots. Brookner's main approach to The Reef is to recruit Henry James. It's the 'most rigorous', 'the most finely wrought' of Wharton's novels. It marks the peak of Wharton's 'most brilliant period of creativity'. It is the 'most Jamesian'. One reads, she says, with 'rapt attention', admiring, with James, its 'dramatic unity'.

What does all this sound like? For me and for many fans the 1990s represent a high point of Brookner's career as a novelist. Her Reef Introduction could well indeed be adapted to describe the finely wrought moral investigations of those years. Think A Private View. Think Visitors. It has been truly said that authors, when writing of other novelists, not infrequently write only about themselves. 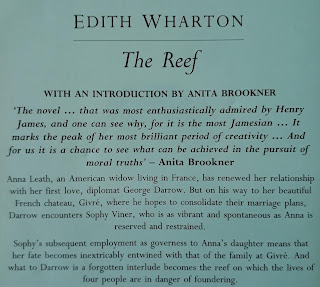 Posted by The Brooknerian at 14:04