It's funny what can put you off a book.

Harold Macmillan, it is said, liked to go to bed with a good Trollope, and indeed was often of an afternoon to be found lolling around Downing Street with an old novel. (David Cameron emulated Macmillan - but he called it chillaxing, and Trollope probably wasn't involved.)

I once went to a play in London about the Profumo affair, and the Macmillan character waxed patricianly lyrical about Trollope, saying he was currently flicking through Cousin Henry and finding it awfully jolly.

I'm a bit of a Trollope fan, or I was once. In fact I've read most of his novels, but some time back. The ones I haven't managed are the early ones (Castle Richmond and the like) and one or two from the later period that simply haven't appealed. Cousin Henry is one of these. It may be I just find its World's Classics cover slightly repellent.

Cousin Henry is one of Trollope's shorter novels. This is actually a point in its disfavour, as Trollope is famously a novelist who needs space. But Cousin Henry, unlike An Old Man's Love or Sir Harry Hotspur of Humblethwaite (both equally fun-sized, though far from fun), turns out to be something of a masterpiece.

Trollopes divide roughly into those that are about public affairs and those that focus on private life. The Prime Minister is an example of the former, its sequel The Duke's Children of the latter. When I say public affairs, of course I don't mean Trollope ignores their private effect on characters. Here, in Cousin Henry, the publication of an old gentleman's will has a devastating impact on several people's personal lives.

The plot is rather complex, but boils down to the following. Mr Indefer Jones is nearing the end of his life, and has no children. He has a nephew, Henry, whom he dislikes, but, conservative in his thinking, Mr Jones makes a will in favour of this male heir. But just before his death he changes his mind and wills his estate to another relative, a young woman named Isabel.

The later will is properly witnessed, but not by a lawyer. It's stowed away in the old man's book-room, and when he dies it isn't found. The earlier will is, and Cousin Henry inherits.

But then Cousin Henry finds the later will, and thus a classic Trollopian moral dilemma is set up. Will Henry reveal the new will? Will he destroy it? If he simply leaves the new will hidden in the book-room, can he remain innocent in his own mind, as well as in the minds of other people?

Cousin Henry's predicament is 'difficult and precarious'. With the lightest of touches, and with great sympathy and even-handedness, Trollope explores the vacillations of this troubled 'half-innocent' man. The result is a strong and original portrait.

Cousin Henry is a powerful exploration of conscience. It has convincing characters and a page-turning plot. And it's short. I liked it enormously. I'm back on the Trollope horse. 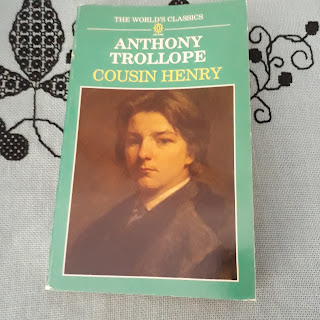 Posted by The Brooknerian at 18:31