The Next Big Thing is Making Things Better in the States. Why? The publishing practice of sometimes altering titles to suit a particular audience has been the topic of an earlier post (see here), and it still intrigues me. Here both titles fit. The phrase 'making things better' is certainly noticeable for the frequency of its repetition; it appears in the text much more often than 'the next big thing'. 'Making Things Better' perhaps feels more upbeat, if also laced with irony. 'The Next Big Thing' is possibly the truer title, inasmuch as it sums up if not the main theme of the novel then certainly the plot's major thrust. But it's a brutal phrase - quite daringly inelegant. Brookner's choice of titles for her many novels never struck me as a strong point, and might even have served to put off potential readers. She never quite found a unifying 'pattern' for her titles - unlike, say, Ivy Compton-Burnett, another prolific writer. At best we can call 'The Next Big Thing' a brave title - and the novel is nothing if not brave. 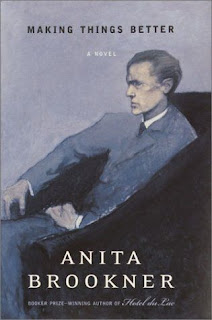 Posted by The Brooknerian at 17:40