Followers of this blog will know I recently read, with great pleasure, Lotte in Weimar by Thomas Mann. Another largely hotel-focused story, the novel takes place in the early nineteenth century but reveals its modernist credentials towards the end, when Mann gives us Goethe's thoughts and feelings in a long stream-of-consciousness chapter. Edith Hope, in Hotel du Lac, though she may look a little like Virginia Woolf, is no modernist, and nor is her creator. Chapter 6, though reflective, introspective, and set deep in Edith's consciousness, nevertheless could have been written by Jane Austen or Anthony Trollope.

Not least because Brookner gives us Edith's letters to her lover. This is a successful and fitting technique, and there will, I recall, be a smart pay-off at the end of the novel, when Edith reveals she hasn't sent any of the letters. But it is old-fashioned. But again, perhaps fittingly so.

[Mrs Pusey and Monica] are not on good terms and use me as a buffer state [Edith writes]. I am subject to a certain amount of balkanization.

Brookner uses metaphor sparingly, and speaks of politics even less frequently. Talk of buffer zones and the Balkans is arresting, dragging the narrative slightly awkwardly into the here and now.

This seems to be a cafe in Vevey, although I can find no mention of it on Google. It will be something to investigate during my visit. I shall also be interested to see whether the Grand Hôtel du Lac has a room 307, Edith's room.

3. The Duke of Wellington

Mr Neville 'looks rather like that portrait of the Duke of Wellington that was stolen from the National Gallery some time ago'.

Goya's portrait was in fact stolen in the early 1960s, when Edith would have been a very young woman. In early Brookner, Brookner's protagonists are often much younger than their creator. 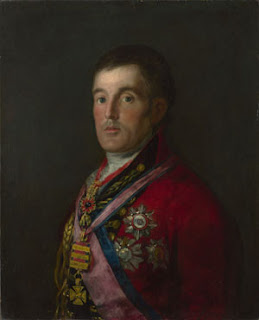 There's a line about emotional incontinence that has been chosen by no fewer than 43 'highlighters'. Who are these people? Why can't they be more continent? Is there any way of switching off this irritating function?

David is seen in his auction room, selling a work called Time Revealing Truth, attributed to Francesco Furini. Hotel du Lac is plainly a populist effort, but it is interesting to see Brookner's wider intellectual concerns and interests intruding on the text. This seems to be the theme of an academic article from 2010, 'Anita Brookner's Visual World'.
Posted by The Brooknerian at 06:14