Why were some of Anita Brookner's novels published in the US with different titles? This seems at best a faintly disreputable practice, at worst an assault on the integrity of an already published text. I can think of other authors who have suffered the indignity, though it tends to be reserved for less thoroughgoingly literary writers (Agatha Christie, P. G. Wodehouse). Ivy Compton-Burnett's Manservant and Maidservant was, however, given the somewhat unwieldy US title Bullivant and the Lambs. I can't think of traffic in the opposite direction, but there are probably examples.

Is it a case of US publishers asserting their authority? Or are there cultural or other reasons that certain titles 'work' in Britain but not in America?


A Start in Life (UK) / The Debut (US)
For a novel that references Balzac, The Debut is an interesting alternative, echoing Balzac's Un début dans la vie.

A Misalliance (UK) / The Misalliance (US)
Do Americans prefer the definite article? (Additionally: I'm not sure about this, but I think Latecomers was published at one time as The Latecomers in the States.)

A Family Romance (UK) / Dolly (US)
I've never much liked the British title. 'Family romance' is a term coined by Freud, and of only vague relevance to Brookner's novel. But Dolly is a safe, traditional, unimaginative alternative.

The Next Big Thing (UK) / Making Things Better (US)
The Next Big Thing sounds a little like a marketing treatise. 'Making things better' is a phrase that's repeated throughout the novel. Is it perhaps that Stateside readers prefer hopeful-sounding titles? 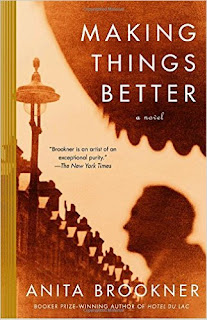 Posted by The Brooknerian at 17:13

Email ThisBlogThis!Share to TwitterShare to FacebookShare to Pinterest
Labels: A Family Romance, A Misalliance, A Start in Life, Anita Brookner, The Next Big Thing, titles