Up to a Point

Aurora Floyd is an heiress, handsome and rich, with a native cleverness. A year of her life is mysteriously missing, but this is 1860s sensation fiction and the seasoned reader will spot the clues. When she marries a bluff young landowner all seems set fair, till a face from her past appears and the secrecy and double-dealing run out of control.

Written hot on the heels of M. E. Braddon's other famous bigamy novel, Lady Audley's Secret, Aurora Floyd is a fast, racy, slangy read. Its atmospherics are notably creepy; Braddon, like Wilkie Collins, is a very visual writer. The novel builds to a climax set in high summer: Braddon is brilliant at night scenes. She owes debts to Dickens too in her fondness for low eccentrics and detailed lists. The higher-class scenes feel a little like Trollope. But of course Trollope also sometimes sounds a little like Braddon, or at least he does in The Eustace Diamonds, his own attempt at the sensation genre. Except that Trollope is too honest, perhaps too decent a writer for the genre. He can't - he won't - keep secrets from his reader, which isn't something that can be said of Mary Elizabeth Braddon, who has the annoying habit of allowing a degree of intimacy between the reader and a character's innermost thoughts, but only up to a point - the point being where the plot, and the need to keep the reader guessing and turning the pages, take priority.

Looking back through my blog, I recall I had plans at one time (November, 2019: innocent days) to plug the gaps in my knowledge of Victorian sensation fiction (see here). I have tended in the interim to prefer more settled, less calamitous reads. We all know why. 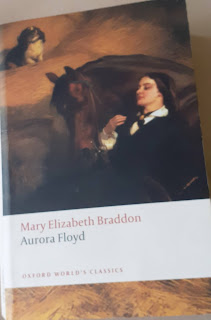 Posted by The Brooknerian at 13:31