Not too skilled at literary multitasking, and having enough tasks of other kinds to complete, I don't often have more than one book 'on the go'.

But sometimes very different texts will complement one another. As the year darkens I find myself at once in 1870s New York and one of those weird hothouse Italianate courts beloved of Jacobean dramatists.

The Age of Innocence depicts 'a kind of hieroglyphic world, where the real thing was never said or done or even thought, but only represented by a set of arbitrary signs', while Thomas Middleton's The Maiden's Tragedy is about knowingness and frankness, but not among everyone. In both there is a gender divide, and a further polarity between women who 'know' and those who don't. Edith Wharton distinguishes the 'nice' from the 'free': the virginal May Welland is that 'terrifying product of the social system ... the young girl who knew nothing and expected everything', and for Middleton,

... let the boldest ruffian touch the ear
Of modest ladies with adulterous sounds,
Their very looks confound him and force grace...

Each text is a masterclass in style, but each is sometimes too rich, sometimes too finely woven. Both worlds are utterly venal and utterly disillusioned. I shall look out for other such informative pairings. 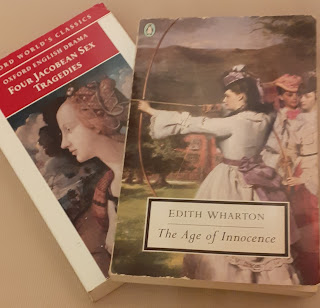 Posted by The Brooknerian at 07:05