Little seems to happen for much of Washington Square, Henry James's short novel of 1880. Catherine Sloper, apparently unmarriageable, but also an heiress, receives the attention of the young handsome plausible impoverished Morris Townsend. His motives are obvious if unconfirmed, or never fully confirmed. Catherine's father strongly objects to the match, and the bulk of the novel concerns the conflicts that result.

The ending of the novel is often seen as its best feature, and that was my experience the first time I read it, in my youth. But it is how Catherine arrives at her understanding that should be the focus of both study and marvel. James's 'plain' heroine is really nothing of the sort. The manoeuvres her consciousness achieves are conveyed with astonishing deftness and subtlety: I think I simply missed them first time around. That she might 'accomplish something by ingenious concessions to form' is Catherine's great, quiet discovery. It is also, in this early novel, James's.

Nevertheless the concluding chapters still dazzle and move, and the last line is one of the best in literature. 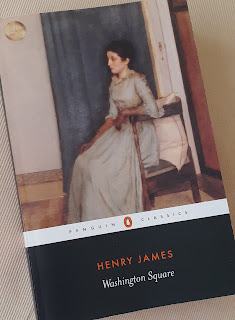 Posted by The Brooknerian at 15:00