Brookner’s ‘About the Author’ pieces, those little spiels of biography that adorned the dustjacket flap or the inside front cover of her books, and which in the early, primitive, pre-Internet days of my fandom were almost my only source of information about her, were brief and non-committal, often terse, and sometimes rather defiantly ludic. But one fact was never withheld: that Brookner, having been born in London and lived there most of her life, had spent three postgraduate years in Paris.

Brooknerians dream of Paris. They long for it. It lures them. The reality is often quite different. Julius Herz in The Next Big Thing, not in the pink of health, heads for the French capital for the day, and finds it exhausting, monumental. This isn’t the Paris he remembers, that place of charm, of charming youthful encounters. He doesn’t belong any more. It isn’t his Paris.

Key Paris episodes are to be found in A Start in Life, Family and Friends, Lewis Percy, Fraud, Incidents in the Rue Laugier, Leaving Home and Strangers. One’s favourites shift and alter. I used to love the romance of the Paris scenes in Incidents – I even once visited the rue Laugier (it was oddly unevocative) – or Family and Friends. The scene in the latter, at the Hôtel Bedford et West End, where Mimi waits for her lover, who does not come, who never would have come, affected me deeply in my youth, and on early Paris visits I would walk up and down the rue de Rivoli in search of that hotel, which I didn’t find.

A Start in Life and Lewis Percy process memories of Brookner’s student days, in the Fifties. We know for certain that her first sojourn in the city was from 1950, when Anthony Blunt brokered for her a scholarship to the École du Louvre, and that her parents were against the plan. They thought she might be conscripted into prostitution! (No such luck, an older Dr Brookner later commented.) A plaintive cry went up: Come home! They tried everything. They kept her short of funds.She lived in poverty. But as she said elsewhere, sometimes you have to save your own life. But when exactly her famed three postgraduate years in Paris actually were is anyone’s guess. They were probably in the 1950s, but in her later brief memoir about her Paris landladies Brookner describes much later residences. She was probably shuttling fairly constantly between London and Paris, like characters in Falling Slowly and Leaving Home.

The two contrasting cities – the one dark, restrictive, costive, the other full of light and openness and good fellowship – function in Brookner’s novels much like the Old and New Worlds in the novels of Henry James. It’s Brookner’s International Theme. But the reality is often another matter, as it was for poor Julius Herz. He heads into a church in the Latin Quarter to see a favourite painting, but really nothing works. And in Brookner’s final novel, Strangers, we get, right at the end, our final Paris visit. The story’s over, Brookner’s run out of road, but she still has pages to fill, and this is where she comes into her own. She sends her protagonist on a wild goose chase to Nice, and then back up through Paris, where nothing is as he remembers it. And he’s old, like Herz, and gets alarmingly tired. It is always to the safety of London that Brooknerians must return.

I first went to Paris when I was about twenty, with a couple of friends. We drove, took the ferry – this was before the Channel Tunnel opened – and stayed in a pure dive of a youth hostel in one of the banlieues. Later, and many times, I returned by myself, staying in various small hotels closer to the centre. Once I met Marie, my French friend, the woman I’d been with in London when I met Anita Brookner. Marie had lived in Paris in her student days, possibly during the événements of 1968. (Brookner wasn’t a soixante-huitard, was most likely completing her year as Slade Professor at Cambridge at the time, and looked back rather sceptically on those allegedly heavenly, blissful days. There’s a critique in her novel The Rules of Engagement.)

Marie took me to the rue Mouffetard, where she had lodged. She showed me Sainte-Chapelle and Notre Dame, and we wandered along the Seine and browsed the booksellers’ wares. We ate omelettes in a Left Bank crêperie called something like Miam-Miam. She took pleasure in pointing out at another table a group of students who were, she said, involved in a deep philosophical discussion. This was real life, this was real living. That was her lesson.

I was in Paris alone in 2002, when I bought the newly released The Next Big Thing from the W. H. Smith store on the rue de Rivoli and took it back to my dark little hotel room to read with horrified, enervated delight. I was in Paris another time, on a summer’s evening, reading Woolf’s Jacob’s Room. Magical long-ago days. But during those later visits the disenchantment was unignorable. I think I last went there in 2009, and I hated it. It was so large, so adamantine, and so international. There were still all the old movie-set locations - but take a step away from them and you might be anywhere. I saw it was a city to which, like Mimi in Family and Friends, I would never return.

How often Anita Brookner went back there in her later years we don’t know, though Herz’s dismal daytrip on the Eurostar in The Next Big Thing has an air of authenticity. But in her fiction, in almost every book, there is at least a mention, some memory of heady days. But precisely when those days were in her real life, and what they comprised, and who was there, and what happened, we’ll probably never know. Brookner wasn’t averse to speaking of her past, but she spoke legendarily. She was good at covering her tracks and she was never going to reveal all. 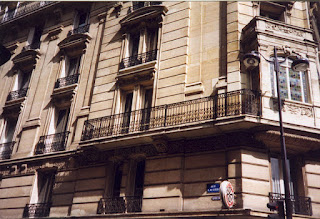 Posted by The Brooknerian at 17:07