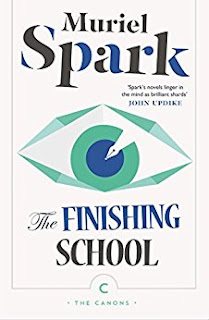 Muriel Spark, a 'fundamentally alarming' author, was, Anita Brookner goes on to say, greatly admiring of Ivy Compton-Burnett, to whom her novels 'owe something' (Observer, 19 July 1992).

One thinks of those schools in Compton-Burnett, in Two Worlds and Their Ways and others, establishments that bear next to no resemblance to any in reality and yet which somehow get at the strange, often extreme microclimatic atmosphere of all educational institutions.

The school in Spark's last novel The Finishing School (2004) is odder than most. Sited on the banks of Lake Geneva,* the place is run on the most liberal of lines by a young man Rowland Mahler and his wife. There are a handful of pupils, including an aspirant novelist called Chris. Rowland, who is himself, as Spark puts it, one of those people who can't get by without writing a novel, is deeply envious of Chris. Chris, he believes, shows great talent, whereas Rowland, only a decade older, seems at the outset to be more or less washed up - 'finished', we might say.

Spark was never much interested in realism, and at this stage in her career anything goes. As always she's in the driver's seat, casually revealing facts about characters' past and and future lives, delivering weird set-piece scenes as the whim takes her, and riffing on the life of Mary Queen of Scots, the less than promising topic of Chris's novel-in-progress.

The 'ruthlessness of art' is probably the novel's theme, if it has one. Rowland is jealous of Chris, and gradually as the story progresses Chris becomes obsessed with Rowland: they hate and fear but also need and perhaps desire each other. All this culminates in an act of violence, as so often in Spark, and there's a surprising ending. But nothing and no one in the novel is as anarchic or as ruthless as Spark herself, ever sharp and wicked and laughing behind her hand.

Is The Finishing School, as my copy's blurb suggests, the 'perfect partner' to Muriel Spark's more famous school novel? Possibly. But it's a dark and riotous twin, and in some ways a truly preposterous book. But presented with such carelessness, such freedom, we should rather, I think, marvel and be in awe.


*
* The novel opens with a creative writing class, with Rowland Mahler discussing the best way of setting a scene. The scene in question is the view from the window, of the lake and the far French shore. Is Muriel Spark having a bit of a laugh here? For of course what famous and Booker-winning (Spark missed out on that award) novel begins with just such a description of that very view?!

There's very possibly a further Brookner-related jest to be found later in the novel, when we meet a middle-aged woman who, Spark tells us, would have been and would be 'forty-five for many years'.
Posted by The Brooknerian at 17:32